Tsukimi Dango is probably the Moon Festival’s most iconic dish. A small pyramid of 15 moon-like dango, it’s remarkably simple to make! It only takes two ingredients, and we are certain you already have one of them on hand. Let’s get to it!

*Why 15 you ask? Well, for one, it makes a good pyramid. But Japan's Moon Festival, though often called Otsukimi, is also called Jugoya which means "15th night," so it's 15 dango to represent the 15th night of the 8th lunar month, the day of the Moon Festival.

Like most things, everyone has their own way of making tsukimi dango a little special. Some variations we’ve seen include replacing 50g of Joshinko with 50g of Mochiko (glutinous rice flour) for a more chewy texture. Others add about 20g of sugar for a little sweetness. While we shared instructions for boiling the dough, you can also steam it if you prefer for a slightly different texture.

To steam the dango, follow all the preparations above and place the dumplings into the steamer above a pot of boiling water. Line a steamer with a damp cotton cloth or parchment paper and place the rice balls into the steamer. Cover and steam on high for 15 minutes and carefully remove each with chopsticks and leave to cool.

In eastern Japan tsukimi dango are typically eaten plain, but in western Japan they're enjoyed with sweet red bean paste (anko) and is sometimes called kansai-style. These dango tend to be slightly larger, and are tear drop shaped. The anko forms a blanket around each dumpling. To achieve this, smear a helping of anko onto a clean cotton cloth and wrap the cloth around the cooked dumpling. You should be able to pull the cloth away from the anko. 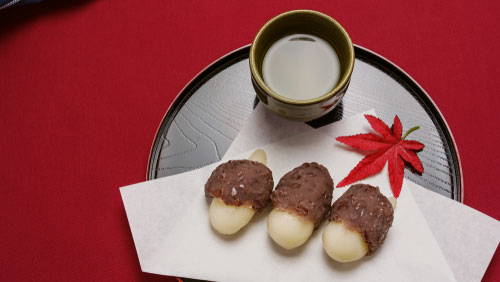 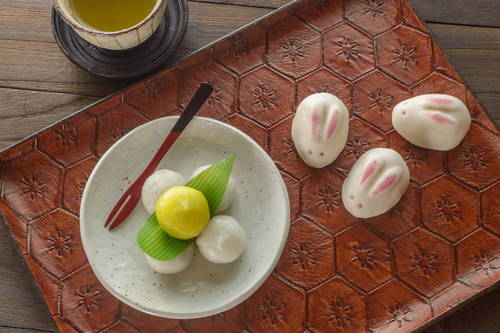 Sometimes, the dango sitting at the tippy-top of the pyramid is colored yellow, like the glowing harvest moon. To achieve this, a small amount of either pumpkin or sweet potato puree can be added to the dough.

Other people like to make a few extra dango and transform them into little bunnies by adding tiny ears! Just take two pinches of dough and roll them to the shape of a grain of rice, press them to the top of your dumpling, gently flattening them before boiling or steaming.

So this Jugoya, will you be making Tsukimi Dango? Share a photo if you do on social media #tsukimibokksu!