Tsukimi or Otsukimi, is a traditional Japanese holiday celebrated on the 15th day of the 8th lunar month. The name literally translates to “moon-viewing” and falls on the night of the Harvest or mid-autumn moon. Celebrations in Japan date back to the Heian Period (794 to 1185) when courtiers would gather at night under the mid-autumn moon to recite poetry and play music.

Though few people gather on the night of the harvest moon to recite poetry and play music anymore, Otsukimi remains a popular time of celebration in modern-day Japan with a variety of traditions new and old to partake in.

However, some traditions remain, such as displaying decorations made out of Japanese Pampas grass, offering seasonal food to the gods (most commonly sweet potato), and eating a type of rice dumpling called Tsukimi Dango. While traditions for the Moon Viewing Festival changed over time, what hasn't is how important this festival is to Japanese culture. 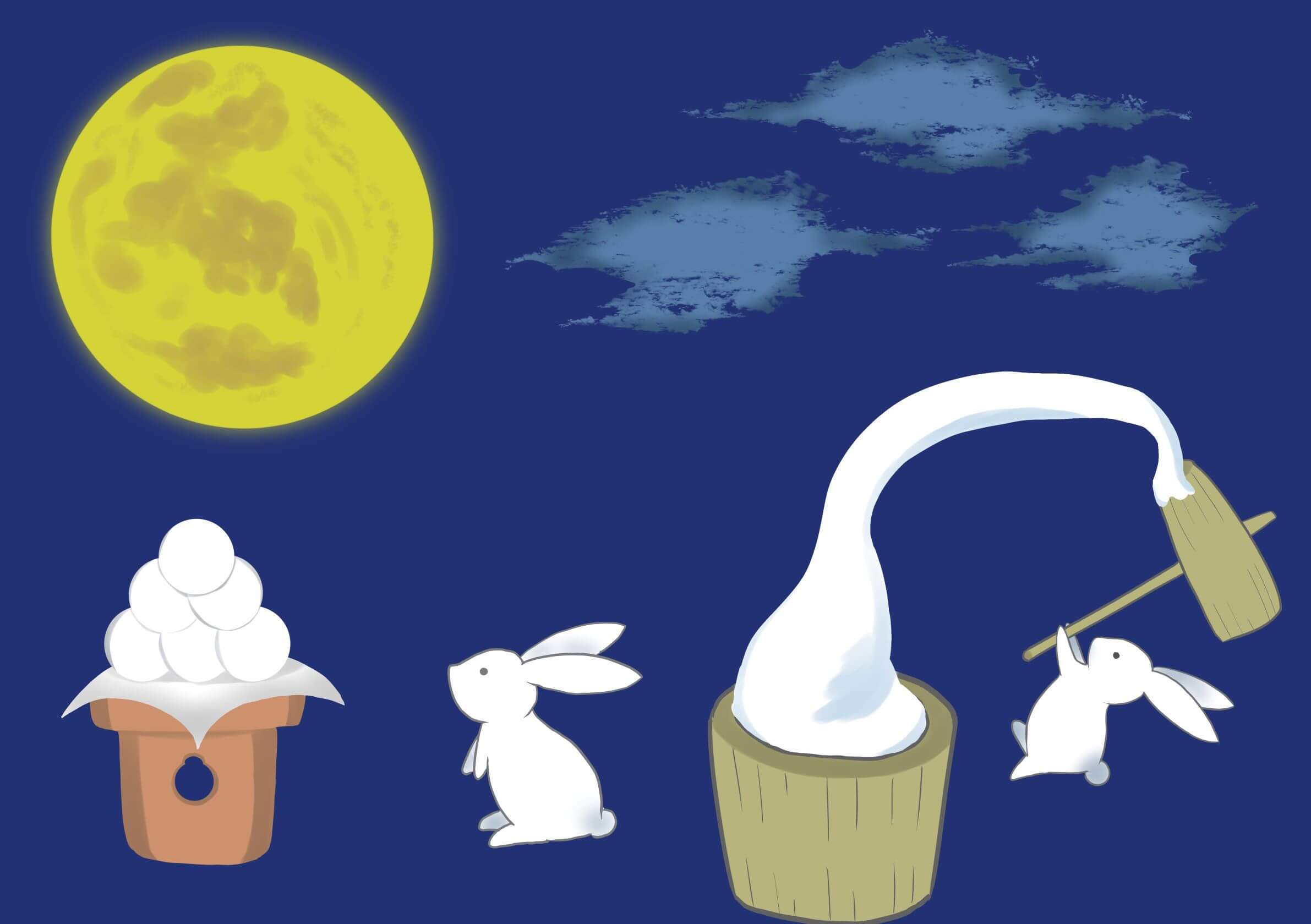 The Myth of the Rabbit and the Moon

If you look carefully at a full moon, you might just notice a shape that looks like a rabbit pounding mochi with a mortar and pestle. In Japan there’s a folktale that tells of how this celestial rabbit came to be, and nowadays in celebration of Tsukimi you’re likely to find lots of rabbit shaped decorations and snacks in its honor.

This short Japanese children’s song is often sung during Otsukimi celebrations, and is something all children learn growing up, like a nursery rhyme. Here’s the original Japanese, and our translation:

What are you looking at while you leap?

It looks at the Jugoya moon while it leaps 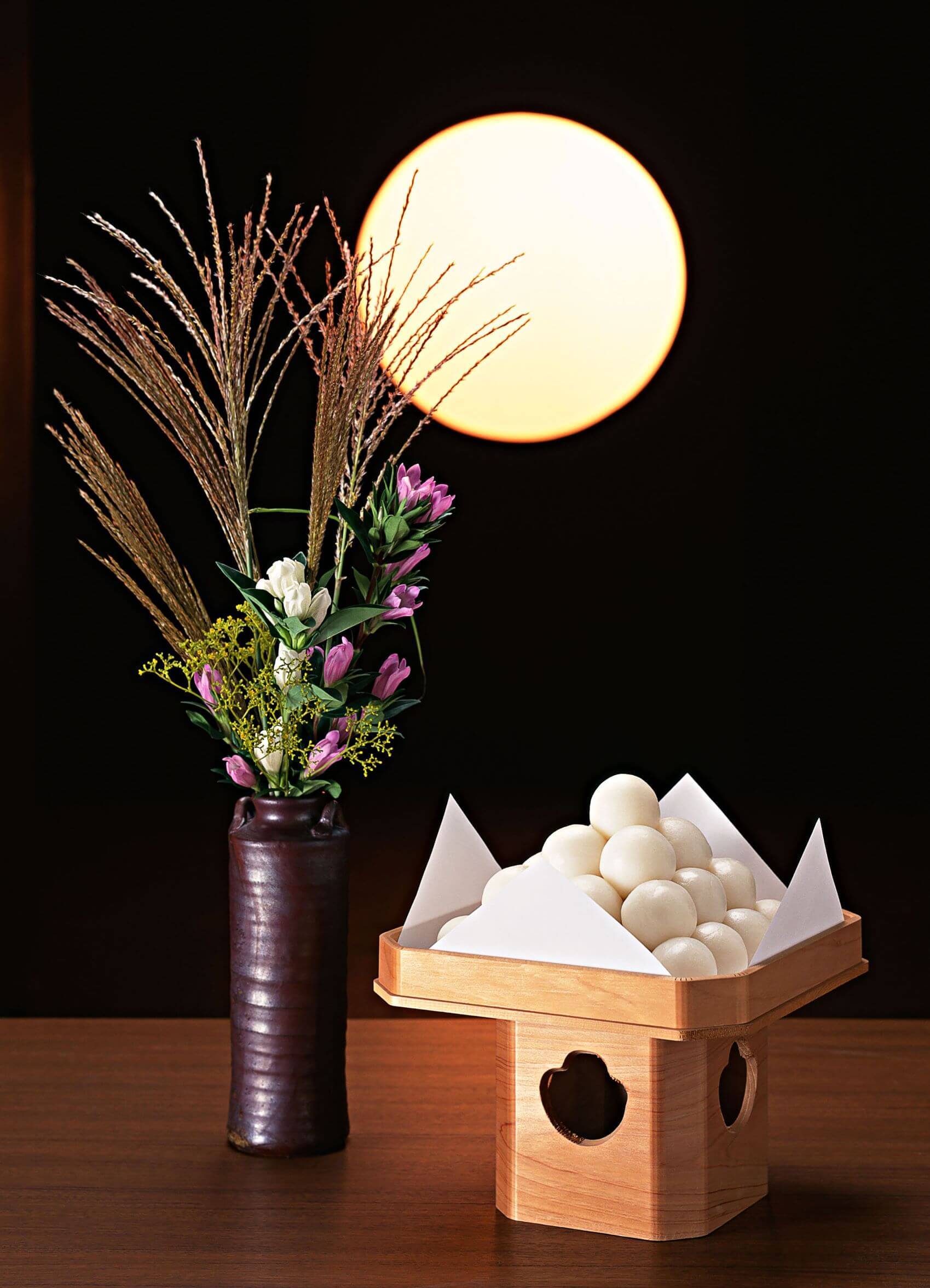 At a Tsukimi celebration you’ll often find tsukimi dango, a pyramid of 15 (for the 15th day) white rice cakes. Sometimes the top-most dango will be colored yellow like the harvest moon, and other times people will shape extra dango like little rabbits. Want to try your hands at preparing your own tsukimi dango? It’s super simple, and you already have at least half the ingredients at home.

In a large bowl, combine the rice flour and water gradually, slowly mixing by hand as you do until combined.

Knead the dough until smooth and has a similar consistency to the feeling of squeezing an earlobe.

Roll the dough into a long rope and cut it into 15 equal pieces.

Roll each piece into a little ball.

Set a pot of water on high heat and bring it to a boil.

Carefully place the Dango in the water and boil until they begin to float.

Transfer the Dango to cold water briefly before placing on a plate to continue cooling.

Form a pyramid of the 15* little moons and enjoy under the full moon!

*Why 15, you ask? Well, for one, it makes a good pyramid. But Japan's Moon Festival, though often called Otsukimi, is also called Jugoya, which means "15th night," so it's 15 Dango to represent the 15th night of the 8th lunar month, the day of the Moon Festival.

Like most things, everyone has their own way of making Tsukimi Dango a little special. Some variations include replacing 50g of Joshinko with 50g of Mochiko (glutinous rice flour) for a more chewy texture. Others add about 20g of sugar for a little sweetness. While we shared instructions for boiling the dough, you can also steam it if you prefer for a slightly different texture.

To steam the Dango, follow all the preparations above and place the dumplings into the steamer above a pot of boiling water. Line a steamer with a damp cotton cloth or parchment paper and place the rice balls into the steamer. Cover and steam on high for 15 minutes and carefully remove each with chopsticks and leave to cool.

In eastern Japan, Tsukimi Dango are typically eaten plain, but in western Japan, they're enjoyed with sweet red bean paste (Anko) and is sometimes called Kansai-style. These Dango tend to be slightly larger and are teardrop shaped. The Anko forms a blanket around each dumpling. To achieve this, smear a helping of Anko onto a clean cotton cloth and wrap the cloth around the cooked dumpling. You should be able to pull the cloth away from the Anko.

Along with Tsukimi Dango, you’ll find other seasonal foods like sweet potatoes, chestnuts, and more. You can even make a savory, delicious pie with red bean paste.

Mix in mochiko, sugar, and salt in a small microwavable bowl. Add in hot water. Mix until well combined. Cover the bowl with plastic wrap and microwave the mochi mixture for 2 minutes. Pound mochi using a wooden spoon or your fist for about 3 minutes until the batter is smooth and stretchy. Divide the batter roughly into 8 pieces. Cover them with plastic wrap and set them aside.

To assemble, place one piece of mochi and 2 Tbsp Anko onto one half of a rectangle. Fold the dough in half to cover the fillings and make a smaller rectangle. Finish the edges by pinching and crimping them together or pressing with a fork. Seal well, so the filling doesn’t leak while frying! Repeat the process for the remaining 7 pies. Rest the assembled pies in the fridge for about 15 minutes.

Deep fry them in oil. You can test your oil by putting a small piece of leftover pie crust you cut off in step 3. If the crust bubbles up as soon as you put it in, the oil is ready. Fry each side for about 1 minute until the crust is golden brown. Place the fried pies on paper towels to drain the oil for a couple of minutes and allow to cool slightly before eating.

What is your plan for Tsukimi week? How about making hot crispy mochimochi (chewy) sweet pies at home this weekend? But be careful. Don’t burn your mouth!