In Japan, food is more than just nourishment; it’s an important element of the culture, with layers of symbolism used to represent deeply rooted traditions. Food is a form of expression, as everything from the colors and flavors to preparation and etiquette represents something more than just a meal or snack.

One important area of Japanese cuisine is street food. Not only is it a staple element in many people’s diets, but it has influenced and inspired a lot of other elements of Japanese food as well. You’ll find that many Japanese snacks and treats were inspired by traditional street food found in Japan.

The concept of Japanese street food originated centuries ago. During the Edo Period of 1603-1868, mobile food carts or stalls (yatai) appeared at destinations where travelers would seek out temples and festivals. At this time, Japan was fairly isolated from the outside world but there was a high volume of domestic travelers which helped to increase the popularity of yatai and street food in general. Yatai typically sold regional delicacies and cuisines, which helped a number of regions develop a more diverse culinary identity.

Today, Japanese street food can be most easily found at festivals and celebrations. Many yatai vendors even follow a festival or event circuit around the entire country to showcase their creations in different regions and locations. With more than 100,000 annual festivals in Japan, these food vendors never have any issue staying busy.

Of course you can find street food vendors of all flavors in Japan, especially in big cities or more densely populated regions throughout the country. An increased tourist presence has also helped fuel the love for street foods as it’s a fun and convenient way to try an assortment of traditional Japanese dishes and snacks. Here are just a few of some common street food options you can find in Japan. 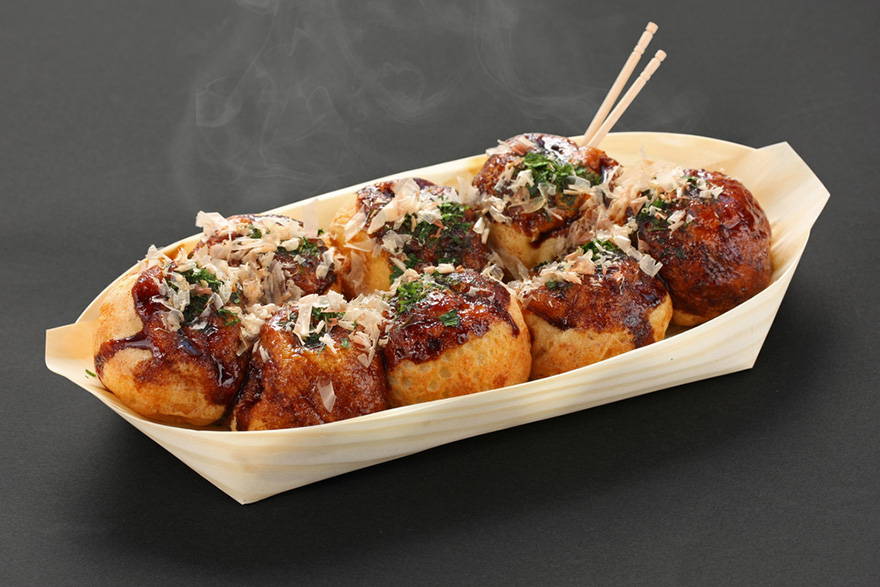 Takoyaki, which is a small ball of octopus deep-fried in batter, is one of the most common Japanese street foods. It can be enjoyed by itself, but many dress it with various condiments such as seaweed or green onion. It pairs well with a salty takoyaki sauce, and many Japanese enjoy washing it down with a beer or another alcoholic beverage. Takoyaki originated in Osaka in the early 20th century, but it quickly spread to the rest of the country and established itself as a staple on the street food scene. 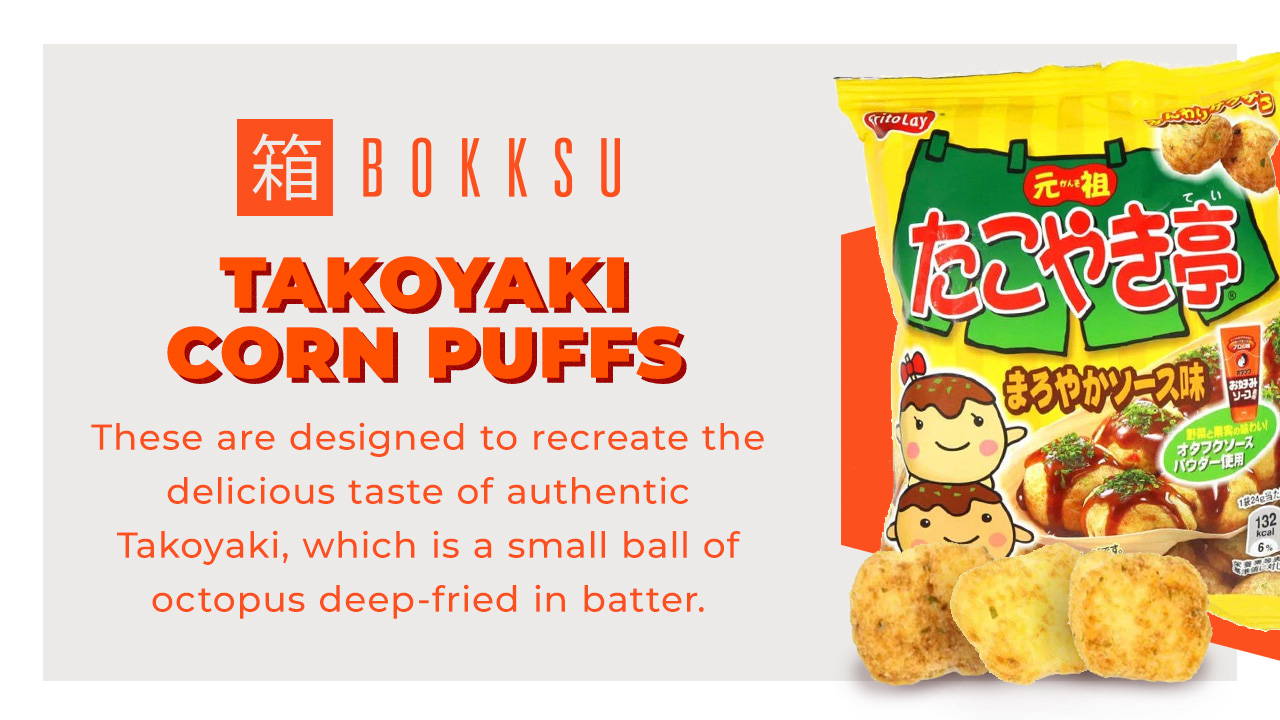 Our Takoyaki corn puffs are designed to recreate the delicious taste of authentic Takoyaki street food. When you bite into one of these delectable bite-sized treats, you’ll feel as if you are wandering the streets of Osaka during the Tenjin Matsuri. This festival takes place in Osaka on July 24th and 25th each year to honor the Japanese deity of scholarship and features fireworks, costumes, and delicious takoyaki street food.

Ramen is another staple in the Japanese street food scene. These pulled noodles were brought over by Chinese immigrants in the 1880s and became very popular among Japanese workers. In the years since, they became a mainstay in the Japanese cuisine and can be found virtually anywhere that serves food. Ramen is typically served in broth with meat, vegetables, an egg, and any number of other ingredients. There are many different variations and types of ramen commonly prepared throughout Japan. 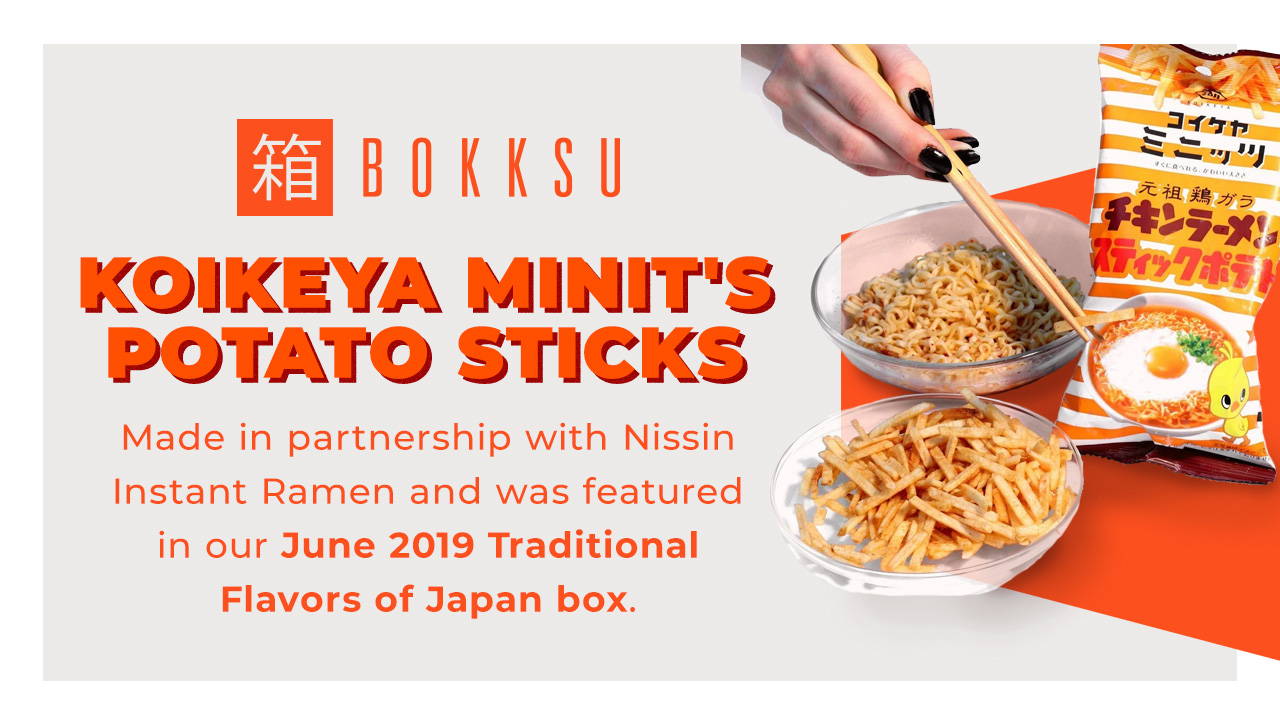 At Bokksu, we sell three different snacks influenced by ramen. The halloween-themed Baby Star Ramen Sticks and the Men Zakuzaku Ramen Sticks were both featured in our October 2019 Haunted Harvest box. Koikeya Minit's Potato Sticks were made in partnership with Nissin Instant Ramen and was featured in our June 2019 Traditional Flavors of Japan box. All three of these delicious snacks pack the taste of authentic ramen into a dried noodle package.

A close cousin of ramen, Yakisoba translates to “fried buckwheat noodles.” While very popular in Japan, it did not originate there. The Chinese have been making buckwheat noodles since 10,000 B.C., and they first appeared in Japan around the eighth century. Yakisoba established itself as a yatai staple in the twentieth century and is still enjoyed very regularly across the country today.

Yakisoba is loved for its versatility, as it can be enjoyed as a meal or side dish. Many add meat and vegetables to a yakisoba base to create a healthy meal, while others stuff it into a hot-dog style bun and enjoy it as a sandwich. 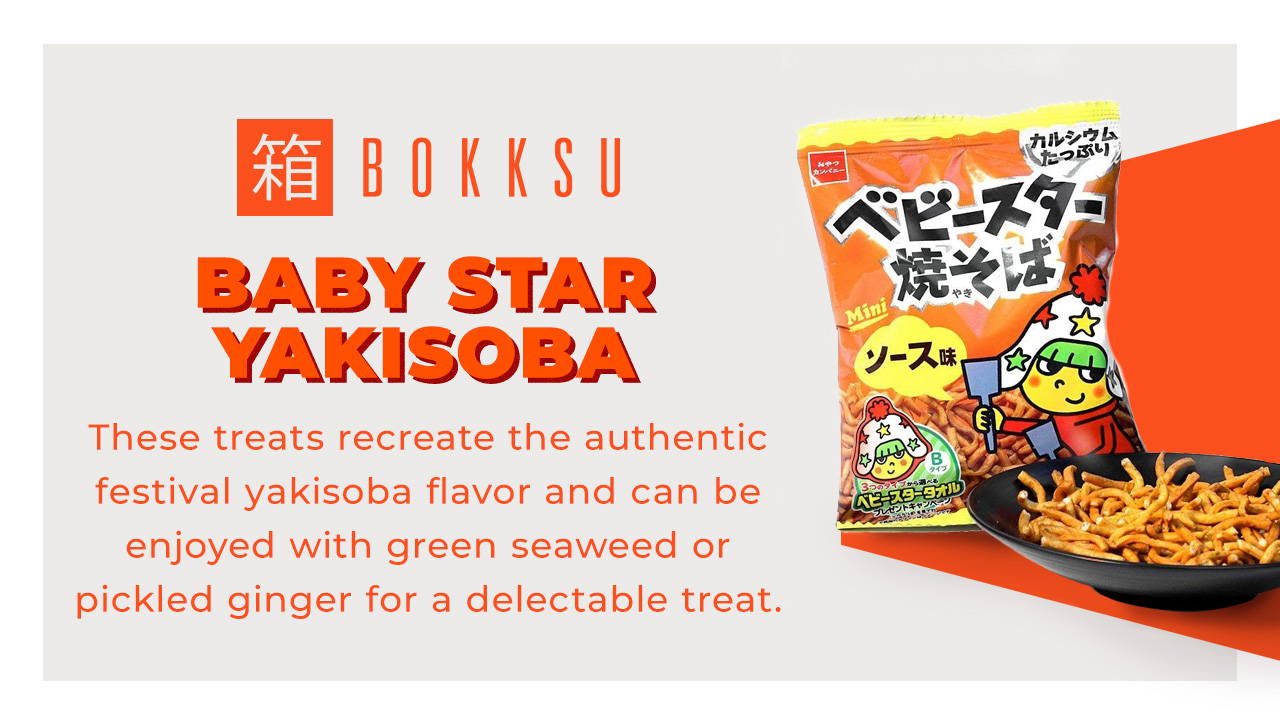 This delicious street food was the main influence for our Baby Star Yakisoba. These treats recreate the authentic festival yakisoba flavor and can be enjoyed in a variety of ways. Enjoy them alone or garnish them with green seaweed or pickled ginger for a delectable treat.

Beni shoga tempura is another delightful Japanese street food. Beni shoga are thin slices of pickled red ginger, and tempura is the Japanese word for deep-fried food in batter. Combine the two, and you get delicious deep-fried slices of pickled red ginger. These are a specialty of the Kuromon Ichiba market in Osaka, as people flock from all over the world to try this delicacy. Beni shoga tempura is also an excellent street food option for vegetarians or vegans, as it does not contain any meat.

Our Beni Shoga Fried Kakinotane treat captures the essence and flavor of authentic beni shoga tempura. It pairs a sharp ginger flavor with a unique fluffy crunchy texture and creates a delectable treat. You’ll likely find it near the same yatai where you bought takoyaki during the Tenjin Matsuri festival in Osaka.

Seafood is a staple in Japanese cuisine, as the island location means there is always an abundance available. This is demonstrated through the popularity of taiyaki, even though it does not contain any seafood. Taiyaki is a fish-shaped waffle pastry filled with azuki bean paste. It’s place of origin is in question, but it became very popular during the Meiji Period of 1868-1912. Taiyaki represents good luck and fortune, so it is commonly enjoyed on special occasions. 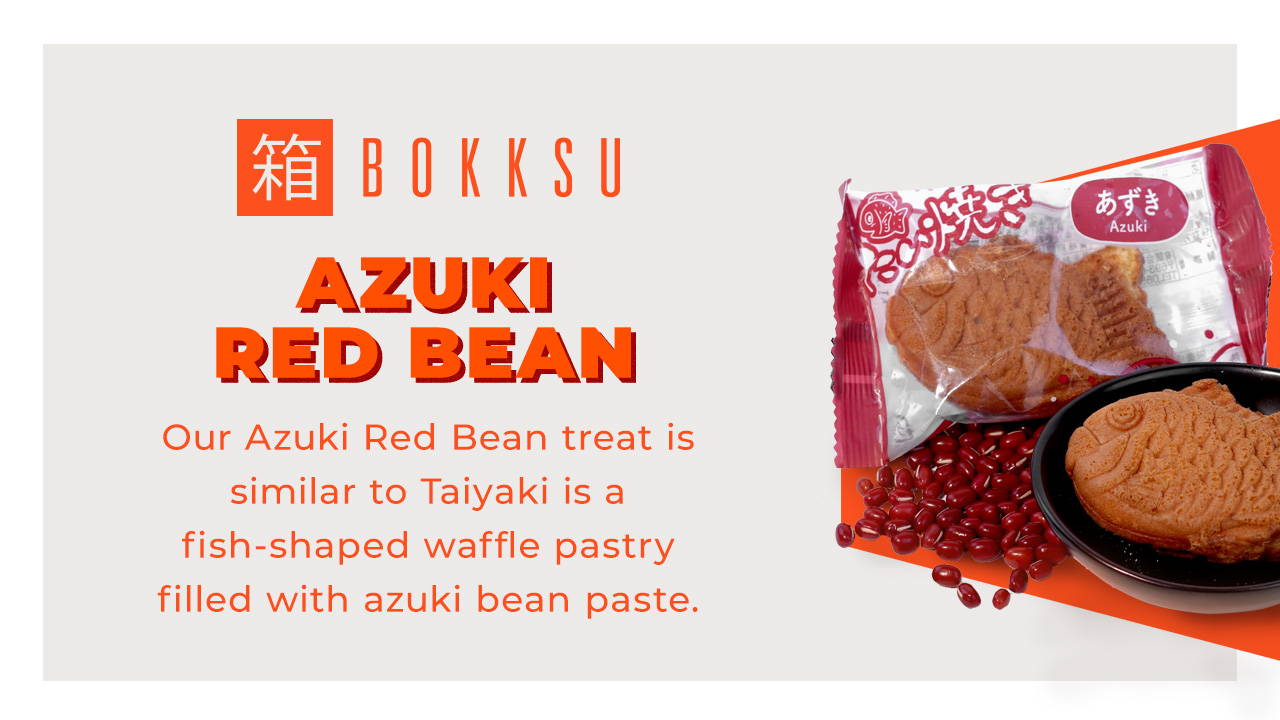 We sell two taiyaki treats here at Bokksu. Our Strawberry Puku Puku Tai is a unique twist on this treat, as it is stuffed with delicious strawberry mousse instead of the traditional paste. Our Azuki Red Bean treat is more similar to a conventional taiyaki.

Dango is another Japanese street food with a far-reaching influence. These sweet rice dumplings supposedly originated in Kyoto but are enjoyed throughout the country. They are often served on skewers and best paired with green tea. Dango is a staple during Kyoto’s Mitarashi Festival where it is presented as a gift offering for the gods. There are many types of dango, but some of the more common variations are mitarashi, hanami, and kinako.

Our Mocchan Dango Mochi treat is coated in sugar crystals and bears a striking resemblance to traditional hanami dango, which is enjoyed during hanami (flower-viewing season).

Crepes are very thin pancakes that originated in France but eventually made their way over to Japan. Around the 1970s, they appeared in Tokyo and quickly became a mainstay in the street food scene. Today, Tokyo’s Harajuku district is internationally renowned for its many different and delicious crepes. 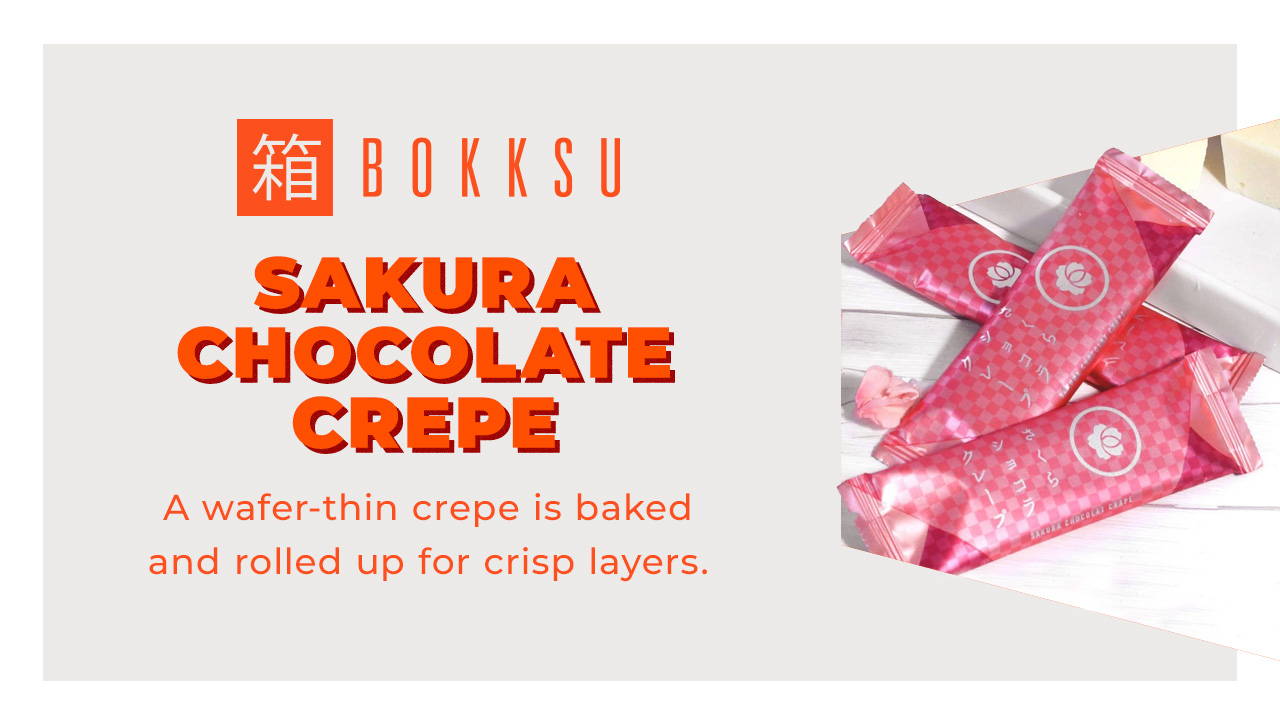 Sweet and savory are the two styles of Japanese crepes, but sweet is more prevalent throughout Japan. When served as street food, they are wrapped in paper and folded into a cone. Sweet fillings include fruit, ice cream, cake, and nuts, while savory fillings include meats, cheeses, vegetables, and eggs. Our sweet sakura chocolate crepe is a springtime staple for it’s delicate and bright flavors!

CHECK OUT OUR ENTIRE SELECTION OF JAPANESE SWEETS

Japanese street cuisine is not exclusively food, as there are popular drink staples sold by yatai as well. Not to be confused with ramen, ramune is a mainstay at any Japanese festival. In 1876, this carbonated soda was invented by a Scotsman living in Kobe. The original flavor was lemon-lime, but it is now available in dozens of different flavors. However, the original flavor still remains the most common today.

Ramune is known just as much for its packaging as its flavor, as it usually comes in a glass bottle sealed by a marble. To open the bottle, push the marble into the soda. This poses a challenge, as it remains there while you drink it, and you must be careful to not tilt the bottle too far. Bottles are often returned to the vendor for reuse. Additionally, vendors usually store and chill ramune in the oldest container they can find.

Ramune-flavored treats and snacks are very popular. Our Handmade Ramune Candy is flavored after the original soda but pairs wonderfully with any type of ramune. It’s even shaped like the marble that comes with the classic soda! It was crafted exclusively for Bokksu by Daimonji and was featured in our August 2019 Firework Festival box. 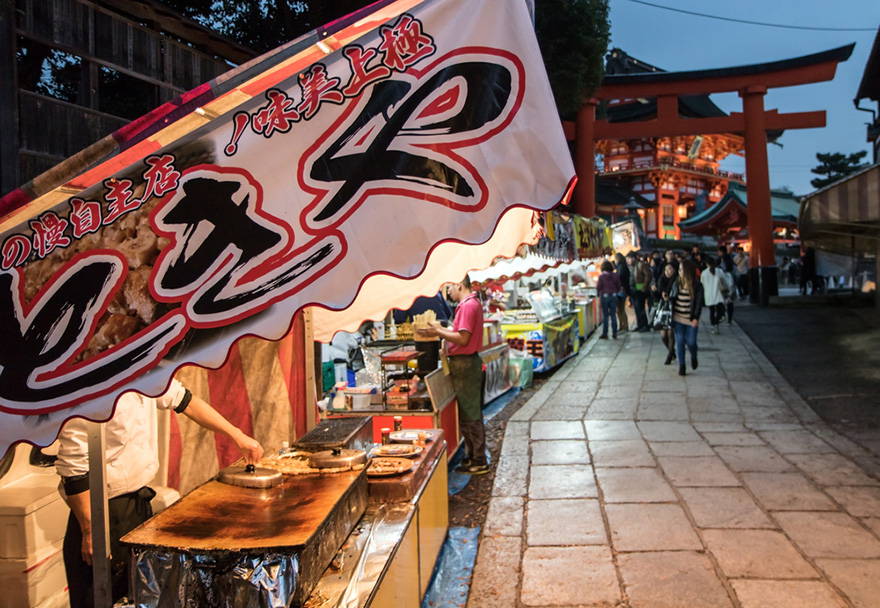 Discover Street Food For Yourself

The influence of Japanese street food is very widespread, as demonstrated by our wide array of snacks carrying their influence. If you find yourself craving Japanese street food, Bokksu’s many treats are sure to hit the spot! By using our Japanese snack subscription box service, you’ll receive a variety of different snacks each month. Whether you choose the Tasting or Classic subscription, you’re guaranteed to find something that satisfies your snack cravings.

All of the treats above have been included in subscription boxes of months past, and they’re also available for individual purchase on the Bokksu Boutique. For more information concerning our snack boxes or individual items, please see our FAQ page or contact us directly. We’re here to help bring the taste of authentic Japanese street food straight to your kitchen through our delicious array of snacks!