If you’re a lover of the sweet, soft, and chewy treat known as Japanese mochi, then you’re in good company here at Bokksu. We’re mega-fans of the iconic Japanese rice cake, and we’re always excited to share our passion with you! Read on if you’re curious about how a basic bowl of sticky white rice gets transformed into those adorable little mochi balls that capture attention in a rainbow of powdery pastel hues. (Hint: Like everything in Japan, the process of making mochi is deliberate, ceremonious, and super fascinating, so it’s definitely worth your attention.) 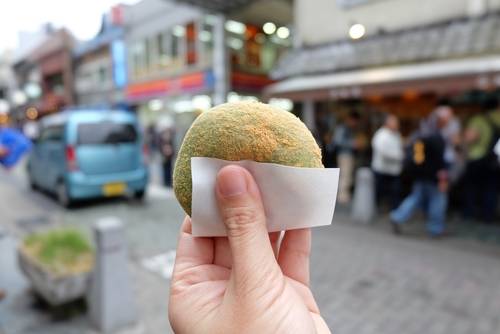 Mochi is made from two main ingredients: water, and mochigome, a short-grain, sticky rice that’s broken down and formed into a shape, usually a sphere. The formed rice ball can be eaten as is, flavored, or wrapped around ice cream or red bean paste, or with delicious toppings. In Japan, mochi is synonymous with celebration, and you’ll find many unique varieties and specialties during celebrations of New Year, spring, and other holidays throughout the year.

In Japanese culture, there is great pride in one’s work, represented by the non-translatable word monozukuri. This Japanese principle signifies a great joy in making something by hand, creating with much skill, dedication, and precision. Even in something as small as a ball of mochi, the Japanese exhibit monozukuri every step of the way. This is perfectly showcased with Mochitsuki, the New Year’s tradition centered around making mochi by hand annually between Dec. 25 and 28.

Mochitsuki involves “mochi-pounding,” where one person hand-mixes the rice dough and one person pounds it using a wooden mallet called a kine. To begin, the sweet, glutinous rice is washed and then soaked for two days in advance before it’s steamed to a soft consistency. Once the rice is done, it’s transferred into a traditional Japanese mortar called an usu, where it is kneaded together into a glob of rice dough. 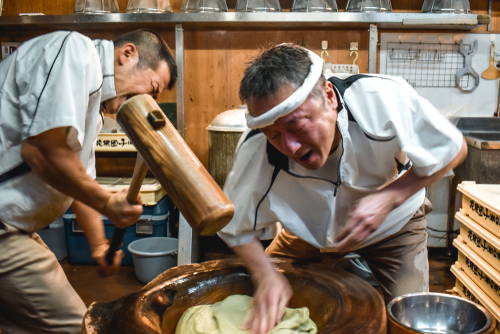 The mochi-pounding process begins with two people pounding the dough with a mallet, making the dough airy and creamy, giving it its characteristic texture. When it gets sticky enough, it’s flipped, doused in hot water, and then hammered some more. Finally, the two pounders alternate—one person pounds the dough once, while one person quickly kneads it in between hits—until it reaches the perfect texture. The dangerous pound-knead, pound-knead rhythm of the two participants requires deep trust in one another.

How Modern Day Mochi Is Made

Naturally, not all mochi is produced in a three-day span during the New Year season. In fact, those yummy mochi balls are made and imported around the world year-round so we can enjoy them virtually anytime. When made at home, the Japanese generally prepare mochi from a premade rice flour (mochiko), mixed with water, and then cooked until it turns into a sticky mass of rice dough similar to the glob that is made during the traditional mochi-pounding process. Though some purists may argue that using flour and not whole grains of rice makes these dango and not mochi (your can find more about dango vs. mochi here). Food coloring or colored ingredients may be mixed in to give the dough a unique hue.

When created using rice and water rather than flour, modern equipment is used in factories and at home to help speed up and automate the laborious pounding task. Smaller versions of these machines are sold in stores for creating perfect mochi at home, but a stand mixer can also be used if you don’t have any special equipment. Once the dough is prepared, the malleable, slightly transparent dough is stuffed with a filling and sprinkled with powder, and then placed in the fridge until eaten. 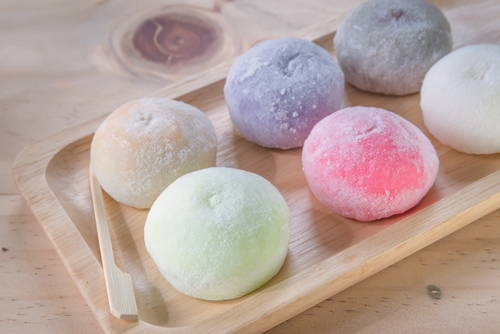 How to Try Japanese Mochi

Want to try this delicious Japanese treat without breaking out the mochi-maker or heading to Japan? There are many options for tasting mochi outside of the archipelago. Of course, you can buy mochi online at Bokksu or sign up for our monthly subscription box, which sometimes includes these yummy balls of goodness. These days, you’ll even see mochi ice cream (the uber-popular mochi balls with ice cream filling) in the freezer section at major grocery stores. The next time you bite in, think of the monozukuri that went into each and every perfect little mochi ball!