Hokkaido, the northern region of Japan, is famous for its snow, cultural traditions, and it’s assortment of regional Japanese snacks. Every year in February, Hokkaido celebrates all of these elements with snow sculptures of enormous size and painstaking detail rising up to rival the buildings in the capital of Sapporo. This event, called the Sapporo Snow Festival, draws in millions of spectators from all over the world who come to admire snow sculptures of castles, cartoon characters, celebrities, and even beloved series like Star Wars!

Last year, there were over 200 snow and ice sculptures. The sculptures can range from historical monuments like the Taj Mahal to Final Fantasy or Hatsune Miku tributes, so, whether you’re a history buff or an anime fan, you’re sure to find pieces that speak to you! 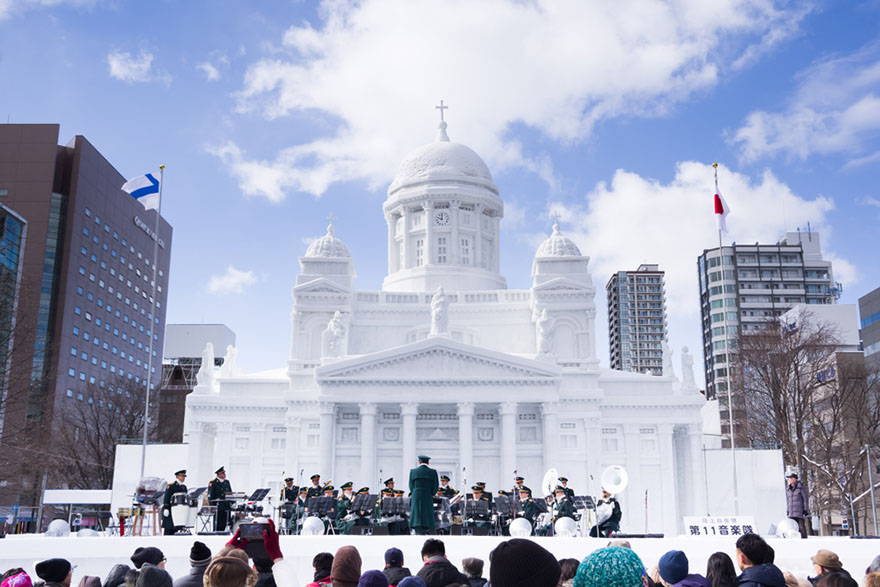 A concert held in front of one of many giant snow sculptures at the Sapporo Snow Festival.

The festival mainly takes place in Odori Park, the central park in Sapporo where one can delight in the snowy spectacles, festival food, music performances, and light shows. Staring up at 50-feet-tall snow sculptures, it’s hard to believe that all of this started back in the 1950s with high school students who sculpted a few snow statues. Their sculptures were 16 feet tall, which is still no mere feat but tiny in comparison to some of today’s structures. Needless to say, the exhibition was well-received, drawing in approximately 50,000 visitors in its first year.

Since then, it’s become an annual tradition, and every year the snow sculptures and the number of visitors continue to grow in size. The snow festival started gaining international attention when Sapporo hosted the 1972 Winter Olympics. Two years later, in 1974, the snow festival opened up its first international snow sculpture contest, reaching a truly global scale that drew in curiosity-seekers and creators.

Year after year, the snow structures become more elaborate, and some of them even have light-projection mapping shows in the evening! People are drawn out to view these shows, despite the freezing temperatures. The festival grew large enough to take over two more areas outside of Odori Park. One is Tsu Dome Site, an interactive community area with a 70-meter-long snow slide, a snow maze, and an area to build snowmen. The other site is in Susukino, the entertainment district, where ice sculptures glisten under the neon lights.

During the Sapporo Snow Festival, which runs for one week, it’s not uncommon to see the park crowded with pedestrians wandering between the snow sculptures, then warming up afterward with a hot meal and drink from one of the many food stalls. Common Japanese festival food fare like yakitori (chicken skewers) can be found, as well as hot sake and hot chocolate to combat the cold.

Thus, the Sapporo Snow Festival is an amazing opportunity to try out some of the best food you can get in Hokkaido. Let’s explore Hokkaido cuisine through Japanese snacks inspired by ingredients from the region, as well as snow-festival-inspired sweets!

Hokkaido’s unique climate and large expanses of countryside allow it to support many agricultural products, including dairy foods. In fact, did you know that more than half of Japan’s milk comes from Hokkaido? Hokkaido’s milk is known for its high quality and creaminess, so, no matter where you are in Japan, it’s not uncommon to see dairy-based products like ice cream and butter boasting that they are made with Hokkaido milk. Below, you’ll find snacks made with real Hokkaido cream.

Experience snow melting on your tongue without the cold by trying these light mochi puffs! These delightful bite-sized clouds are made with glutinous mochi rice that is pounded into an airy texture. Choose between two flavor options: Hokkaido Milk and Hokkaido Cheese. For the Hokkaido Milk variety, each puff is covered in a sweet and creamy Hokkaido milk coating. Meanwhile, the cheese option is great if you want a savory option. 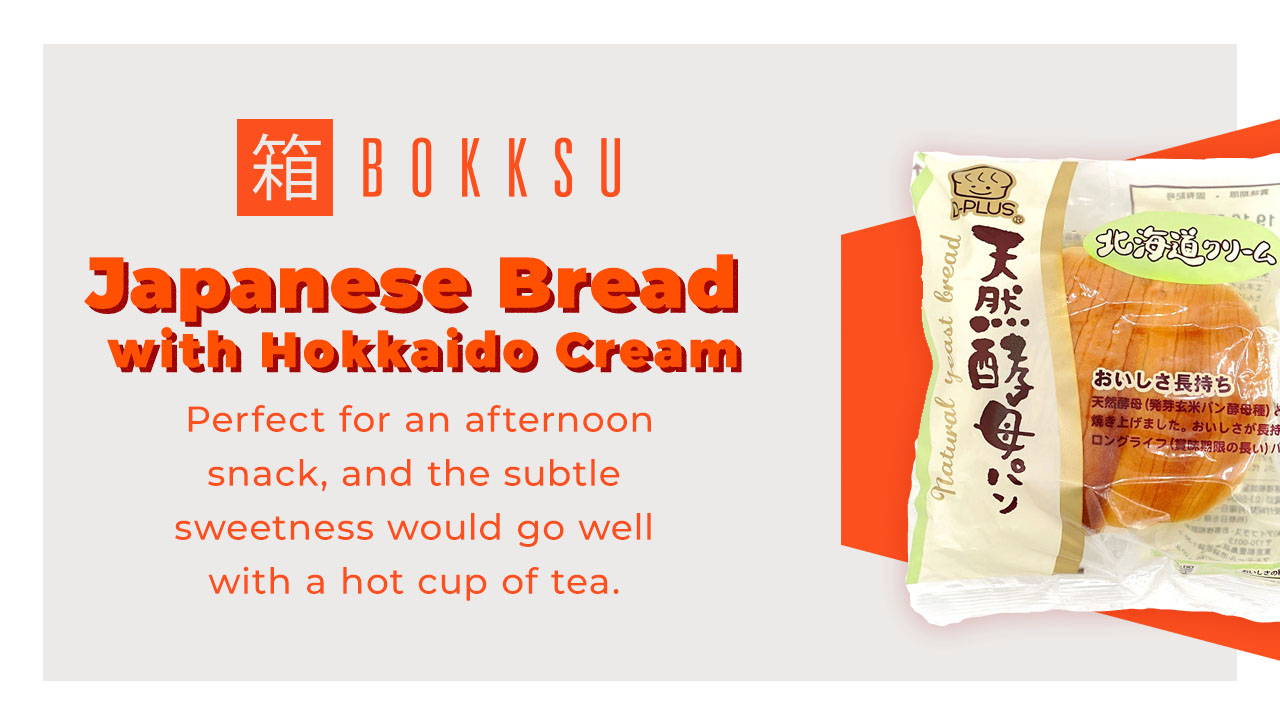 Japanese bread is known for being soft and fluffy. Swirl in some Hokkaido sweet cream, and you’ve got these heavenly pillows! They’re perfect for an afternoon snack, and the subtle sweetness would go well with a hot cup of tea. 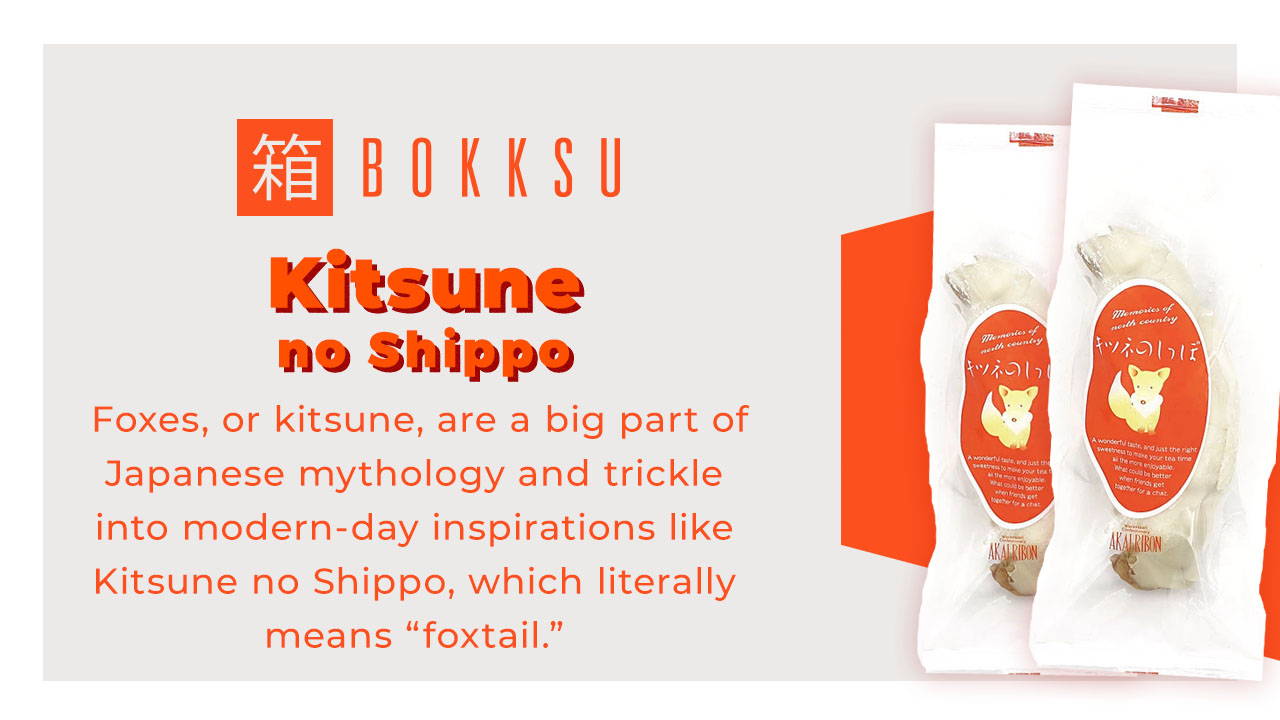 Venture outside Sapporo and into the more remote parts of Hokkaido, and you’ll discover plenty of wildlife like bears, cranes, and foxes. Foxes, or kitsune, are a big part of Japanese mythology and trickle into modern-day inspirations like Kitsune no Shippo, which literally means “foxtail.” It’s seriously one of the cutest Japanese sweets we’ve seen! The little tail is a flaky dough roll, kind of like a croissant, covered in a maple white chocolate.

Next, we’ve got a snack lineup that highlights Hokkaido’s seafood and top crops. Hokkaido has some of the freshest seafood and sweetest vegetables, so it’s no surprise there are plenty of snacks using these ingredients! 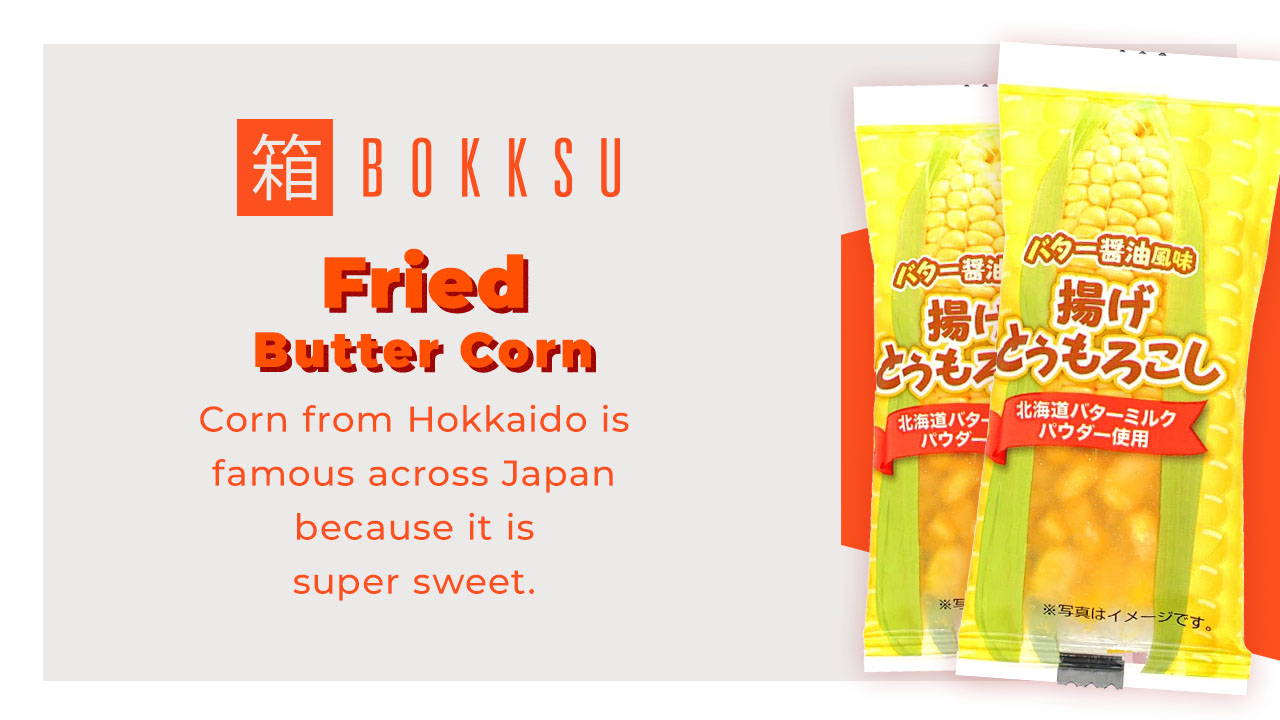 Corn from Hokkaido is famous across Japan because it is super sweet. That natural sweetness means it is often enjoyed as is, on the cob, a common sight at street food stalls. This is one you’ll definitely see at the Sapporo Snow Festival. Slather some soy sauce on the cob for contrast, and you’ve got a mouth-watering, umami-packed treat. Try out a bag of these buttered, soy sauce-dipped corn kernels to enjoy this two-in-one flavor deal! 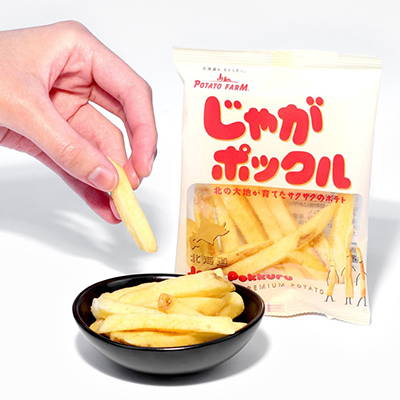 Potatoes are another Hokkaido-homegrown favorite, and Jaga Pokkuru is one of the most popular souvenir snacks to bring back from there. Cut like French fries, this crispy snack is buttery delicious while still retaining the natural potato taste. 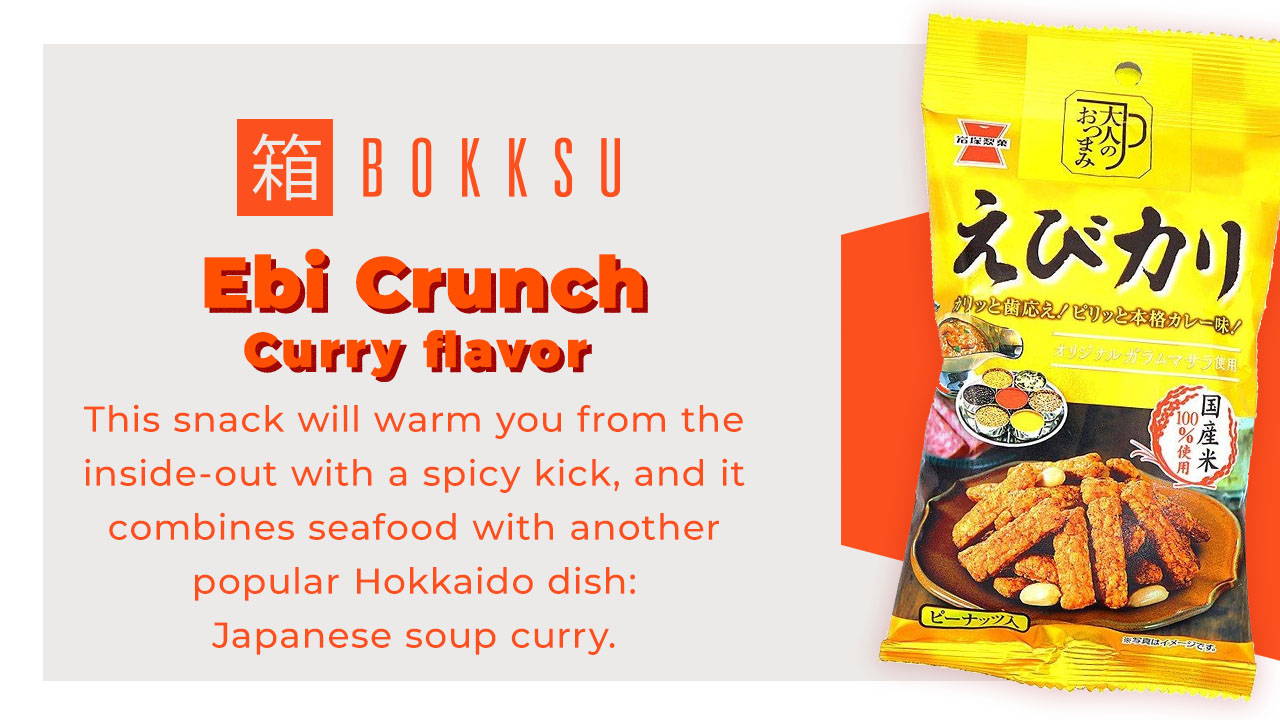 This snack will warm you from the inside-out with a spicy kick, and it combines seafood with another popular Hokkaido dish: Japanese soup curry. You’re likely already familiar with Japanese curry rice, but, as the name suggests, this is a soupier version, and you can only find it in Hokkaido.

Standard Japanese curry normally has meat with carrots and potatoes served next to a bed of rice. Japanese soup curry is packed with plenty more vegetables and spices and is served in a bowl separate from the rice. Warm and soothing, it’s an especially popular meal to enjoy after a long day of skiing. This ebi (shrimp) snack packs that same heat with a flavorful combination of soy sauce, curry powder, black pepper, and a garam masala spice blend.

SHOP ALL OF OUR SAVORY JAPANESE SNACKS

Finally, here are some snacks that we love simply because it makes us think of snowy days! These snacks are perfect for when you find yourself stuck at the house and in need of some satisfying snacks to help keep you warm and cozy. 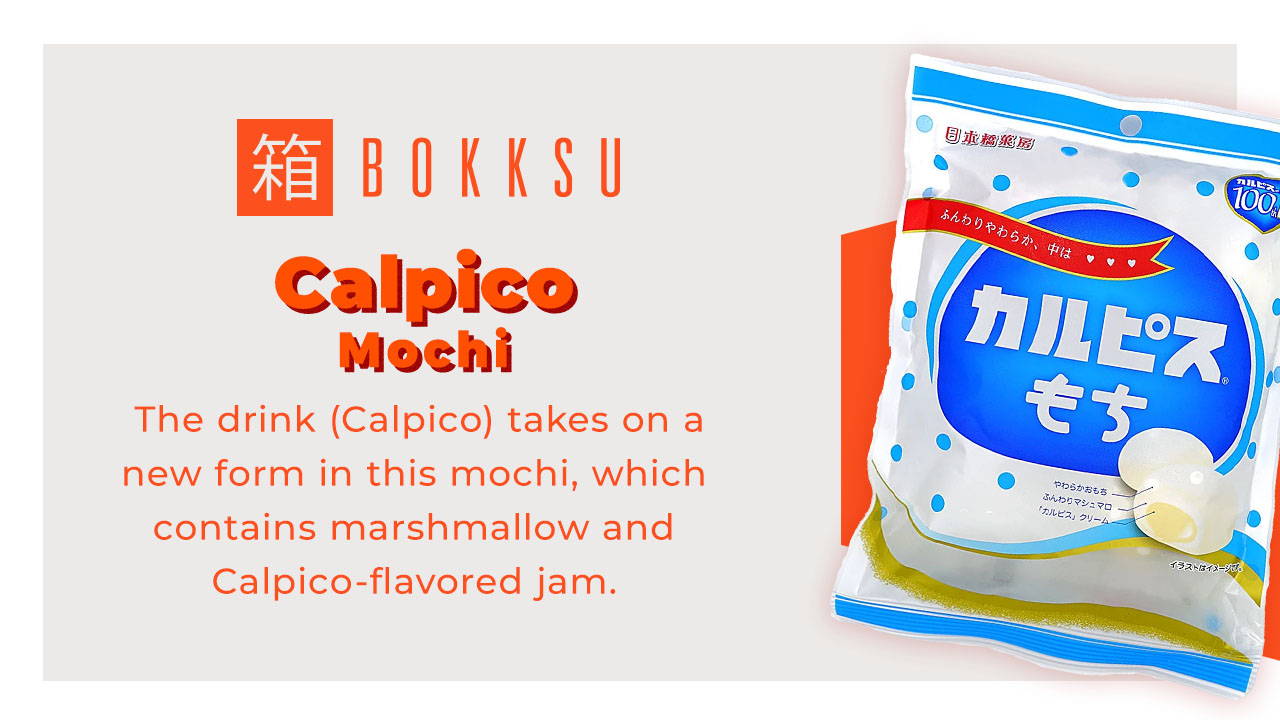 Calpico, also sold overseas as Calpis, is a milky carbonated beverage popular in Japan, no matter what your age. The drink takes on a new form in this mochi, which contains marshmallow and Calpico-flavored jam. The pure white color and soft layers remind us of the snow in Hokkaido. 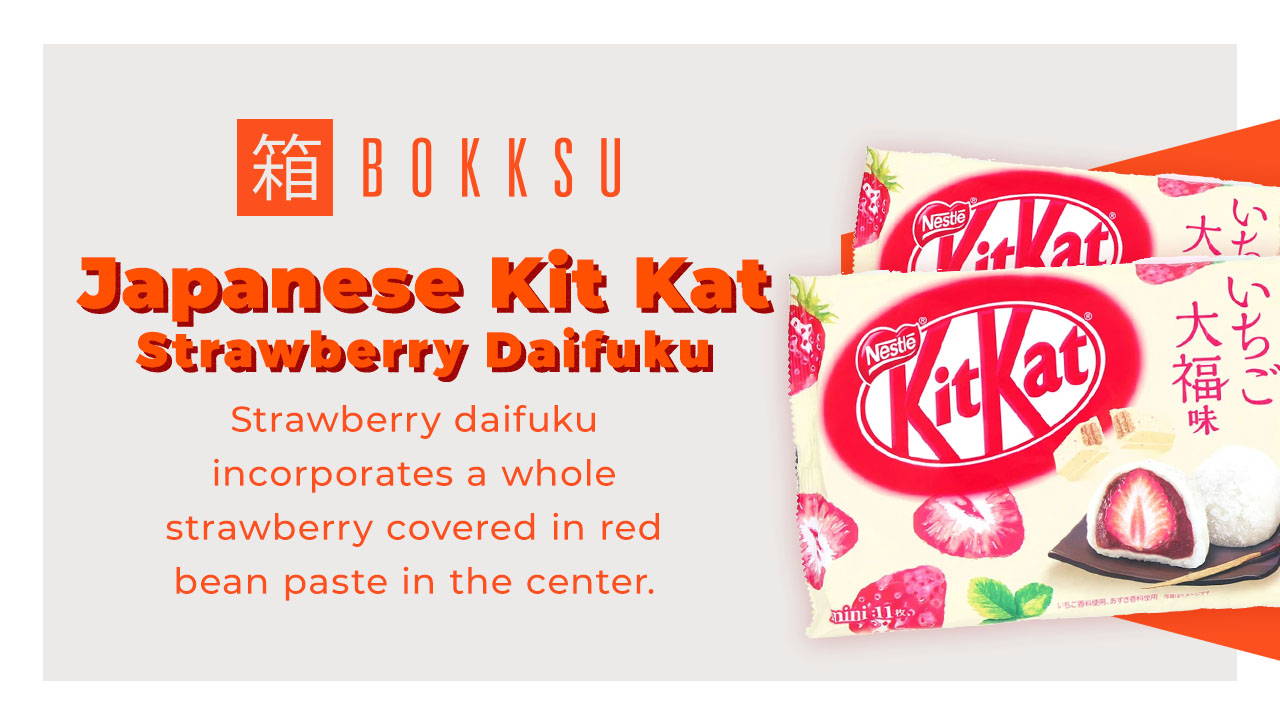 Strawberry daifuku is a traditional Japanese sweet that’s almost too pretty to eat. It’s like a little sculpture on its own! Daifuku (大福), which literally means “great fortune,” is traditionally made with azuki red bean stuffed into a round mochi rice cake. Strawberry daifuku, then, incorporates a whole strawberry covered in red bean paste in the center.

The Kit Kat rendition of strawberry daifuku uses white chocolate to represent the mochi. Strawberry bits and red bean powder are mixed into the white chocolate, and thin layers of red bean paste are spread between the wafer layers. 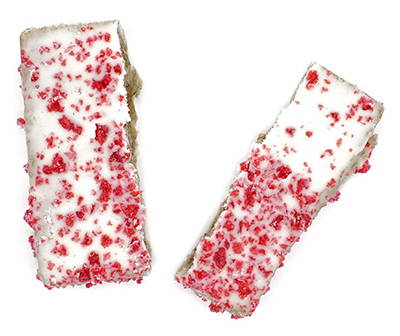 The light, pleasant white chocolate on this snack is speckled with pieces of dried raspberry. It really draws your eyes in, just like the light shows against the backdrop of a snow sculpture at the Sapporo Snow Festival. The inner cookie layer is perfectly crisp and contrasts well with the smooth cream and tart raspberries.

Try Them at Home

We hope you’ve enjoyed this mini-tour of Hokkaido through food. Many of the snacks we’ve featured here were previously in our Hokkaido-themed snack box, but that doesn’t mean you can’t get them now. With our Japanese snack subscription box, you, too, can experience traditional Japanese flavors and festivities right at home.