Old myths have a way of sticking around, don't they? Enduring into modern times, popping up as references and re-imaginings in art, books, movies, shows and other media. One such myth is that of the rabbit on the moon.

This Moon Rabbit, also called the Jade Rabbit in China, has ties to Japan’s Moon Festival called “Otsukimi,” which means “moon viewing.” If you look up at the full moon and try to outline the darker gray area of craters you see the outline resembles a rabbit. It can be hard to see if you've never tried before. If you can’t quite make it out, here's a handy outline from the internet: 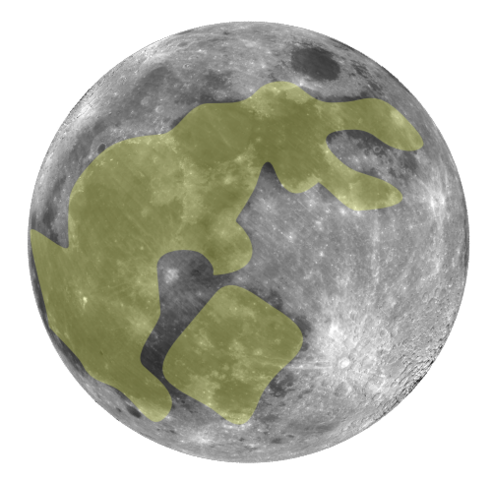 While in the West many see a man on the moon, in Asia the shape of a rabbit on the moon has been passed down in different myths. Many think it looks like the rabbit is pounding with a mortar and pestle. Myths differ on what the rabbit is making in the mortar, but according to Japanese lore, it’s chewy mochi.

The myth of the Moon Rabbit is still relevant in today’s Japanese pop-culture, appearing in manga and anime in the form of heroes, villains, and symbolism alike. Here's our manga reading list for Otsukimi, all featuring the beautiful full moon and modern manifestations of this lunar rabbit!

Bishoujo Senshi Sailor Moon began as a shōjo manga series, written and illustrated by Naoko Takeuchi from 1991 to 1997, as well as an anime series airing from 1992-1997 (with a reboot that began in 2014). Both follow the story of a female middle school student, Usagi Tsukino, who transforms into the superhero, Sailor Moon. Together with the help of friends, the "beautiful guardians" protect Tokyo from galactic villains out to destroy the solar system.

Not to spoil too much if you haven't read or watched the series (which you should, it's a classic), the most obvious reference is Sailor Moon's real name, Tuskino Usagi, a direct reference to the myth, as it means “Moon Rabbit.” Physically, Usagi’s iconic blonde hair is split into two partial-bun pigtails and looks like rabbit ears too. But of course, there's far more to Sailor Moon's backstory to connect this world-famous story to the ancient rabbit on the moon. No spoilers though, go out and watch it yourself!

Formerly a princess, Kaguya Otsutsuki is a powerful villainess from Naruto Shippūden, an anime and manga series written and illustrated by Masashi Kishimoto. Both tell the story of a ninja named Naruto Uzumaki as he works to become strong enough to fulfill his dream of becoming Hokage, the leader of his village.

Though she’s one of many villains throughout the series testing Naruto's skills, Kaguya is an impressive character. She was the first person to use chakra in the Naruto universe and is worshipped as a rabbit goddess. Her name and story line is influenced by many myths. Her name "Kaguya," the same name given to the protagonist of the Legend of the Bamboo Cutter (which was popularly retold in a recent Studio Ghibli film). The name means "Radiant Night," and hints at Kaguya of the Legend having lunar origins. Kaguya Otsutsuki didn't have lunar origins, but instead became the moon when her sons sealed her terrible power away. This rabbit goddess's design is also clearly inspired by the Moon Rabbit, as her two horns resemble rabbit ears, and she is pale like the moon.

Dragon Ball, created by Akira Toriyama, is an expansive manga and anime series that has been around since 1984. Both are about a powerful Saiyan (a race of extra-terrestrials) named Goku as he and his companions search for wish-granting Dragon Balls. It was among the first anime to gain global popularity, so really you should check it out anyway!

The manga and anime adaptation feature an episode early on called “Boss Rabbit’s Magic Touch.” If the name wasn’t enough, the episode has Goku fight the Rabbit Gang and exile Monster Carrot—a literal rabbit man—and his henchmen to the moon. What do they do there? Make mochi, of course! 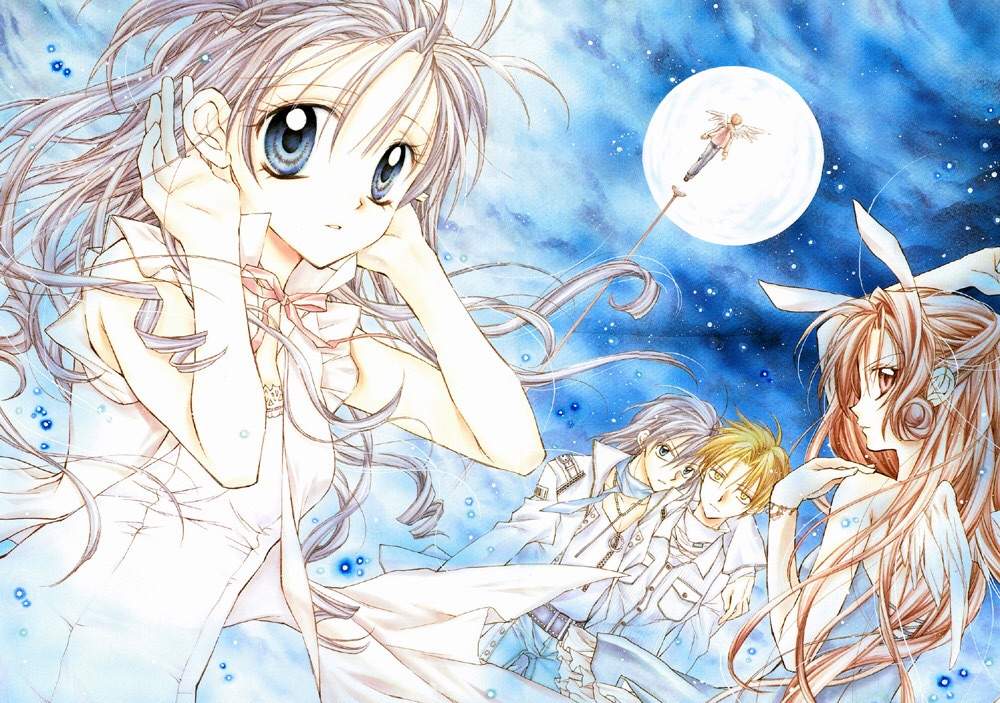 Full Moon is an anime and shōjo manga by Arina Tanemura. In the story, a girl named Mitsuki dreams of becoming a singer but is stricken with throat cancer. Her dream seems impossible until two shinigami, supernatural spirits associated with death, named Takuto and Meroko appear and agree to help her achieve her dream.

They grant Mitsuki (whose name, 満月, literally means "Full Moon") the ability to become a healthy 16-year-old for one year, and she becomes a singer known as "Fullmoon," フルムーン. So we have a character named for the full moon, in two languages no less, and a cute sassy rabbit as the female shinigami, Meroko, who can turn into a stuffed toy bunny.

Tsuki no Shippo or “Tail of the Moon” is a shōjo manga series written and illustrated by Rinko Ueda. Taking place in the Tenshō Era (1573 to 1592), Tail of the Moon tells the tale of Usagi Momochi, a 15-year-old ninja-in-training. While she’s not a very good ninja, Usagi has a gift for using medicinal herbs.

Again, this one is pretty on-the-nose. “Moon” is right in the title, and the name Usagi means rabbit. This lesser known manga is a fun, comedic read. If you're in the market for a shōjo manga to read under the full moon, this will definitely satisfy. 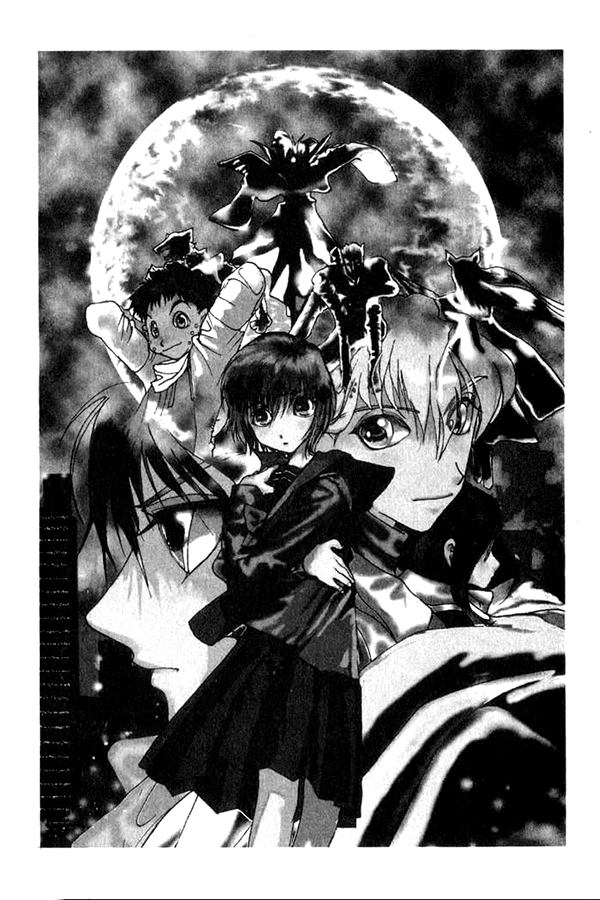 This anime called “Crescent Moon” in English means “incomplete moon” in Japanese. The story’s main character, Mahiru Shiraishi, has the ability to give others good fortune but has bad luck herself. Her last name means “white rock,” which could be a reference to the moon.

Later, Mahiru gets mixed up with the “Lunar Race,” creatures who draw power from different phases of the moon, like vampires, werewolves, kitsune, and tengu. Together they are searching for the "teardrops of the moon" which are the source of the lunar race's power, and discover Mahiru is (spoilers!) a descendant of the Moon Princess who stole the tears away.

The moon moves our oceans, illuminates the night, and has inspired artists, musicians, and writers for thousands of years. The myth of the Moon Rabbit has continued to live on in Japan’s anime and manga and is still celebrated at the Moon Festival. This September, cozy up with some good manga, take a peek at the full moon, and say hello to the Moon Rabbit!

What manga would you add to our list for Otsukimi? Let us know in the comments!