Anime has introduced many people to Japanese culture and food. If you ask any fan, they can easily name foods they hadn’t seen before until it appeared in their favorite show. For some, it may be ramen in Naruto, rice balls in Pokémon, or katsudon in Yuri!!! on Ice. With some exciting anime starting or returning with new seasons in the fall and winter season, we’ve put together a lineup of Japanese snacks to go with your binge-watching! 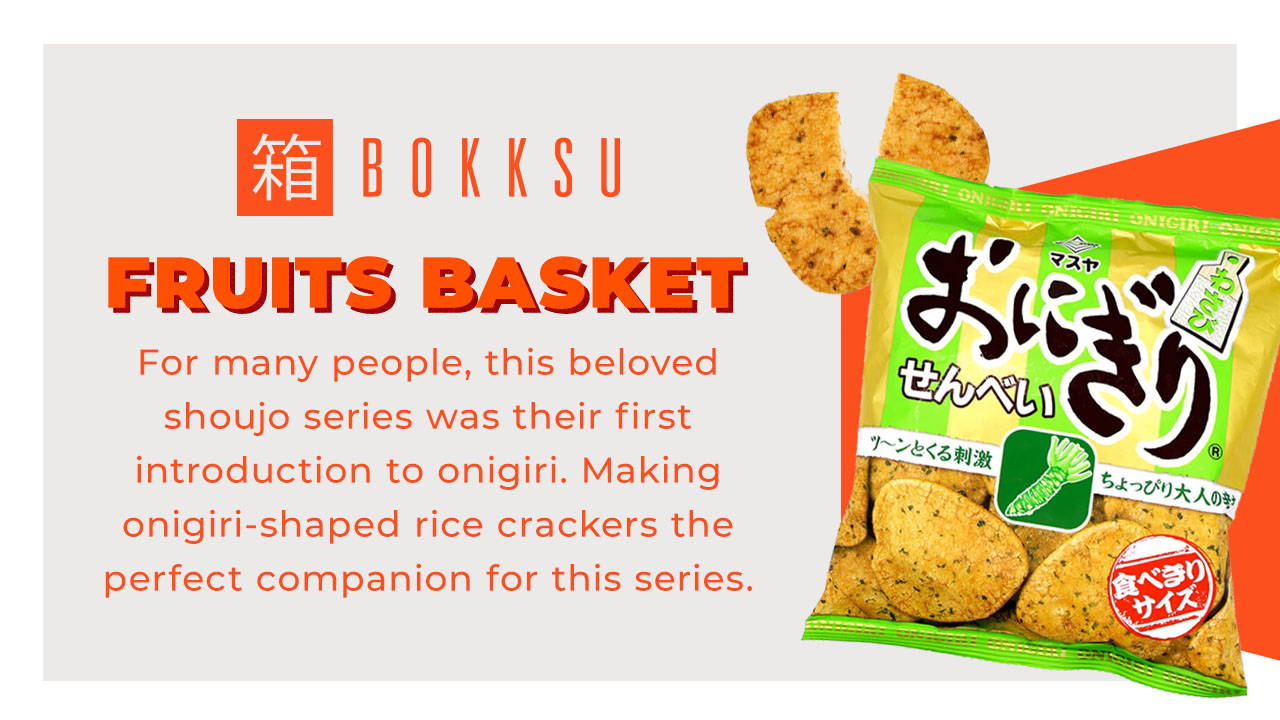 Fruits Basket is a nostalgic series for many anime fans who watched the first adaptation back in 2001. After a reboot in 2019, the new adaptation is currently airing and has brought together old and new fans alike. For many people, this beloved shoujo series was their first introduction to onigiri (rice balls) with umeboshi (pickled plum). Though translated as “rice ball,” the iconic onigiri shape is triangular. That image is perfectly captured in these onigiri-shaped rice crackers, making them the perfect companion for this series.

Senbei (rice crackers) are a classic Japanese snack and are prominent in the series as well. In Fruits Basket, protagonist Honda Tohru is adopted into the Souma household. The Soumas have a large, extended family and, naturally, they are curious to meet her and often pop in unexpectedly to visit. Japanese households are always ready for guests with snacks, and senbei is a popular choice due to their affordability, flavor, and variety. Tohru and company are often seen happily chatting over senbei and hot cups of tea. This simple, satisfyingly crunchy snack comes in savory flavors such as soy sauce, seaweed, and shrimp.

Curious to try Japanese green teas, or looking for a good one to serve your own guests? Sencha, a type of Japanese green tea, is an excellent choice for its fresh flavor that pairs well with almost any food. In fact, sencha comprises about 80% of all green tea produced in Japan. Sencha is considered a middle-grade green tea and its flavor profile is known for its lighter astringency versus other green teas, making it not too bitter and, therefore, favorable to most palates. Sencha from Kagoshima, located in southern Japan, has a stronger profile due to the warmer climate and earlier tea-harvesting season. 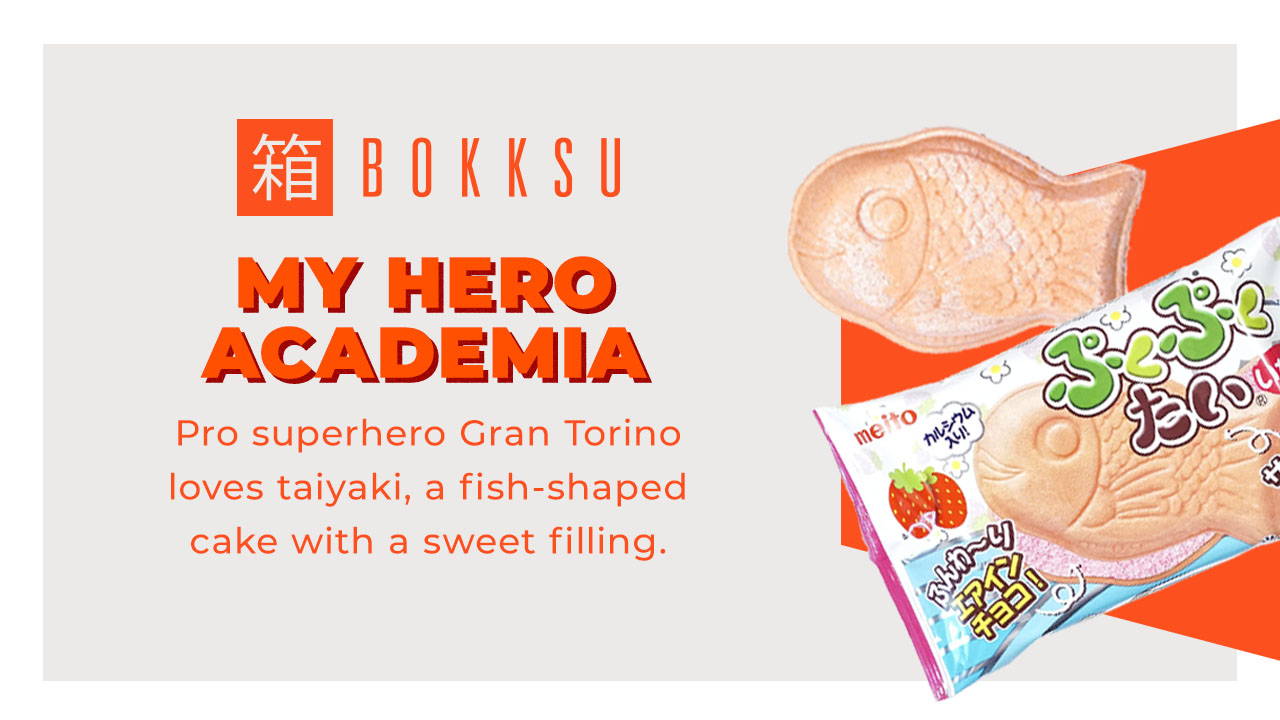 My Hero Academia and Your Favorite Hero’s Snacks

Jump back into action with My Hero Academia season four, coming this fall, and fight off the munchies with your favorite characters’ snacks! A really neat thing about anime is that creators often create detailed profiles for their characters, including their favorite foods. For instance, pro superhero Gran Torino loves taiyaki, a fish-shaped cake with a sweet filling. Traditionally, taiyaki is filled with red bean paste, though other fillings like flavored creams are popular too.

Last season, Gran Torino took protagonist Midoriya Izuku under his wing, and taiyaki surprisingly played a large role in his training! And not just because Gran Torino was adamant about having a full stock of the snack, even sending Midoriya to the store to buy more after some were destroyed after a training session!

Midoriya himself, meanwhile, loves katsudon, which consists of slices of breaded pork cutlet served over rice. This hearty meal is covered in tonkatsu sauce, which is made of soy sauce, vinegar, tomatoes, apples, onions, and other fruits and vegetables. Midoriya works hard to achieve his dream of becoming a hero, and katsudon feels like a fitting food due to an interesting play on words. The “katsu” in “katsudon” sounds just like the word for “win”. Thus, it’s a dish that Japanese people like to eat before exams or competitions.

Tonkatsu sauce isn’t limited to katsudon and is served with many other fried Japanese foods such as okonomiyaki. The rich, flavorful sauce has sometimes been described as Worcestershire sauce or even Japanese barbecue sauce, as the closest equivalents, though we don’t think those quite match up! It truly is a unique flavor experience on its own. Get a taste of tonkatsu sauce with Dondon Yaki, a rice cracker snack bursting with tonkatsu sauce flavor to test it out yourself! 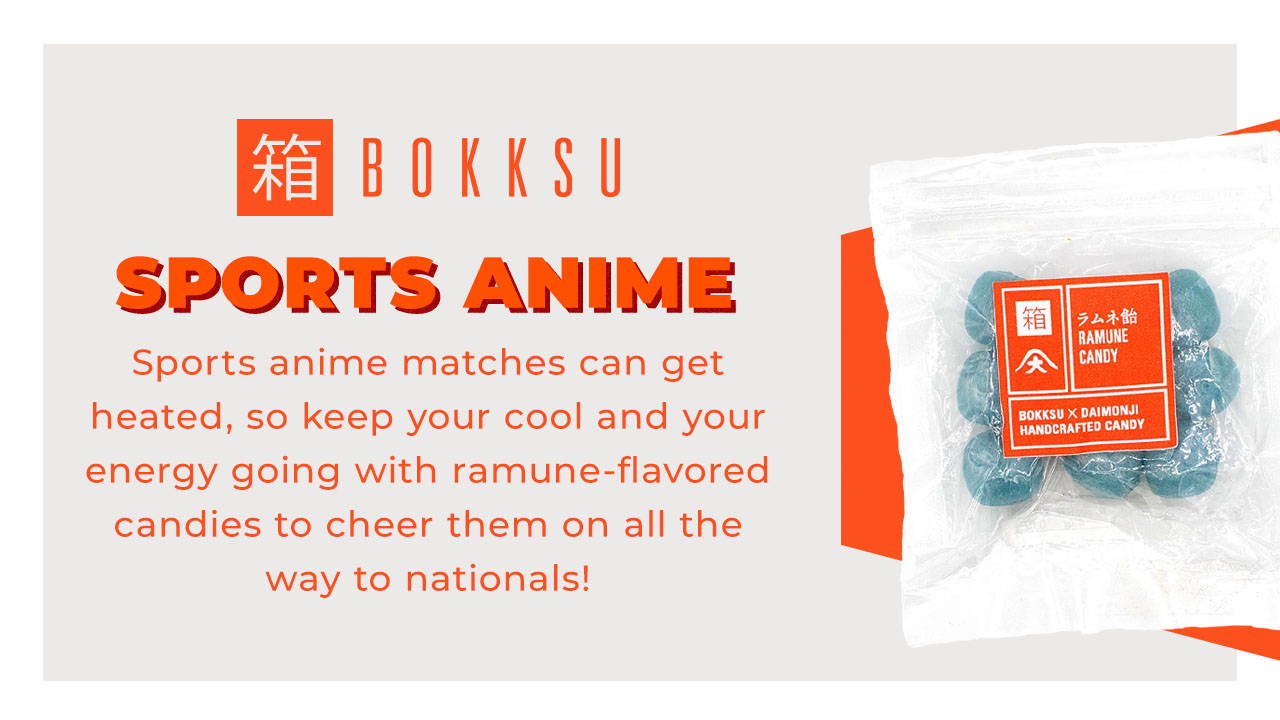 From swimming to ice skating, basketball to baseball—is there any sport that hasn’t had an anime adaptation? 2019 is an exciting year for sports anime fans, with the third season of baseball anime Diamond no Ace, as well as the arrival of a new OVA for the volleyball anime Haikyuu!! in December (followed by the fourth season in January 2020).

Anime focused on high school sports clubs means kids training for nationals and, naturally, they get very hungry—and very often! In Haikyuu!!, the Karasuno volleyball team members are often seen trekking over to the local shop for snacks to fill their bellies. One recurring food item we see is the fictional GunGun Bar, which is most likely a reference to Japan’s best-selling popsicle, GariGari-kun. The icy treat is most coveted by teammate Nishinoya Yuu, who especially loves the soda flavor. 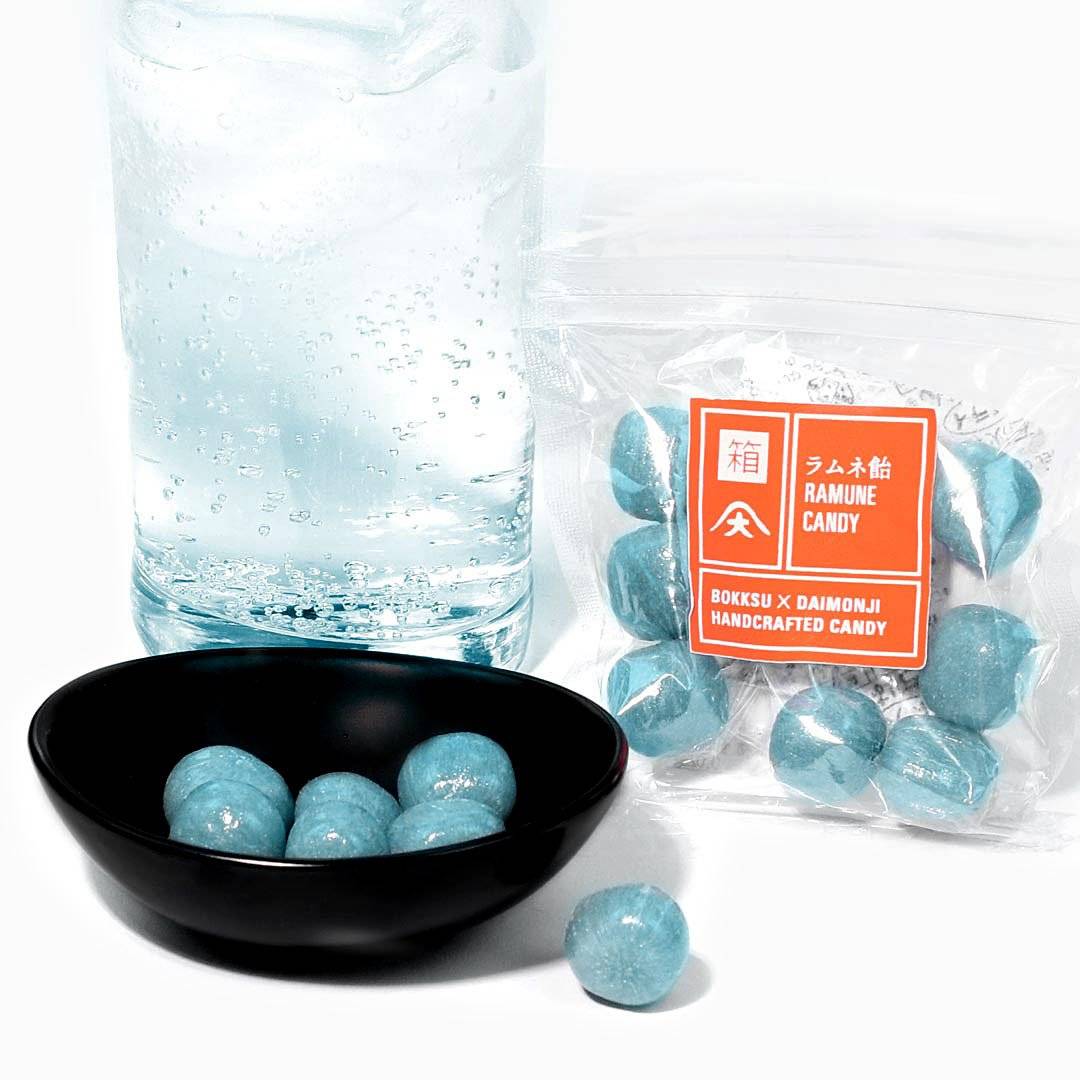 When snacks and candies in Japan are labeled as “soda” flavor, it is most likely meant to taste like ramune, the carbonated soft drink in a glass bottle. This is in comparison to more specific flavor labels like “cola,” which equates to a Coca Cola taste or more specific flavors like “grape soda.” Sports anime matches can get heated, so keep your cool and your energy going with ramune-flavored candies to cheer them on all the way to nationals! 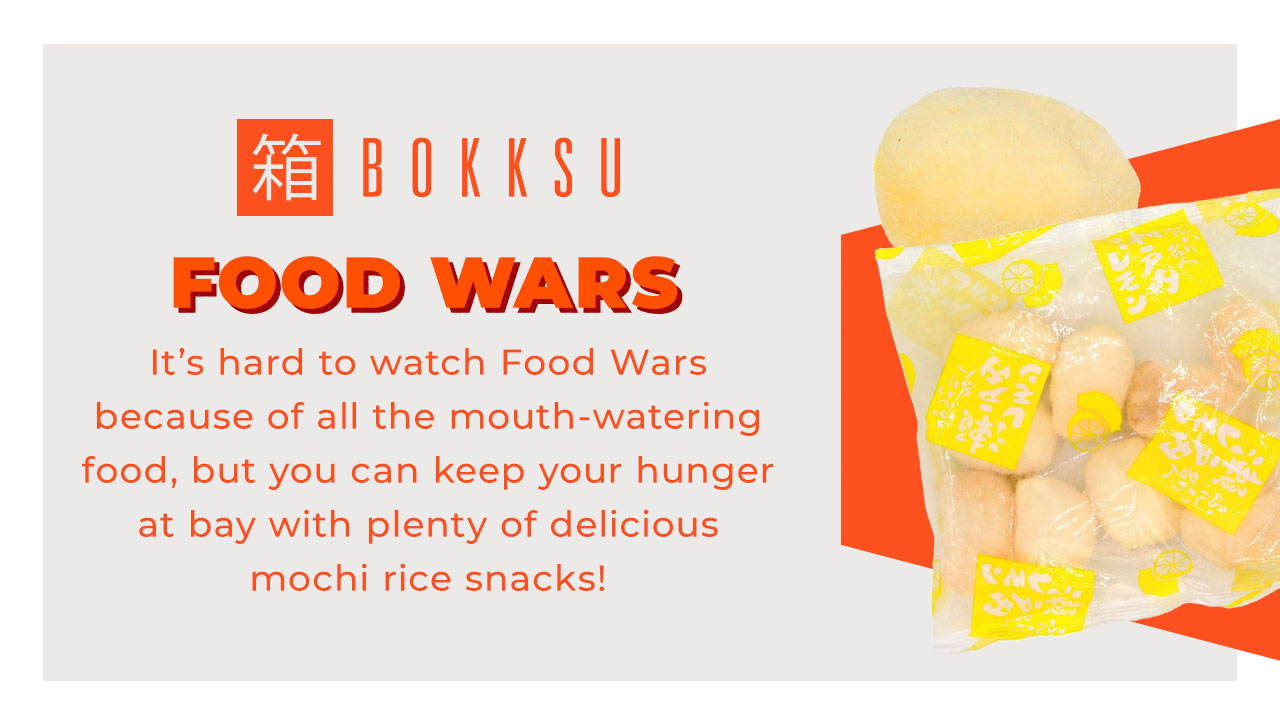 Shokugeki no Souma a.k.a. Food Wars is serving up its fourth season this fall, and fans are eager to see what mouth-watering dishes are animated next! Protagonist Yukihira Soma grew up in a family-owned diner but consistently stands toe-to-toe with his professionally trained classmates at an elite cooking school. Every cooking showdown leaves viewers on-edge (and hungry) as Yukihra creates exciting dishes that incorporate what are viewed as “commoner” ingredients.

One iconic dish early on in the show is Yukihira’s grilled squid in peanut butter sauce. Squid may not be something many are used to eating but, in fact, dried squid (sakiika) is a pretty common snack in Japan! Dried squid is typically shredded into thin strips for easy eating, then processed with sugar and salt to give it an interesting salty yet sweet flavor profile.

Dried squid is a part of otsumami (おつまみ) food culture in Japan, a.k.a. “grab and go” finger foods. Otsumami also includes bite-sized rice cracker snacks or arare. In fact, Yukihira incorporates one of the most popular forms of otsumami in one cooking challenge—using crushed-up Kaki no Tane (small crescent-shaped pieces of senbei and peanuts) to add an extra crunch to his fried fish dish. This meal sent shockwaves to the other contestants since Kaki no Tane is looked down on as a cheap snack at bars. It’s hard to watch Food Wars because of all the mouth-watering food, but you can keep your hunger at bay with plenty of delicious mochi rice snacks! 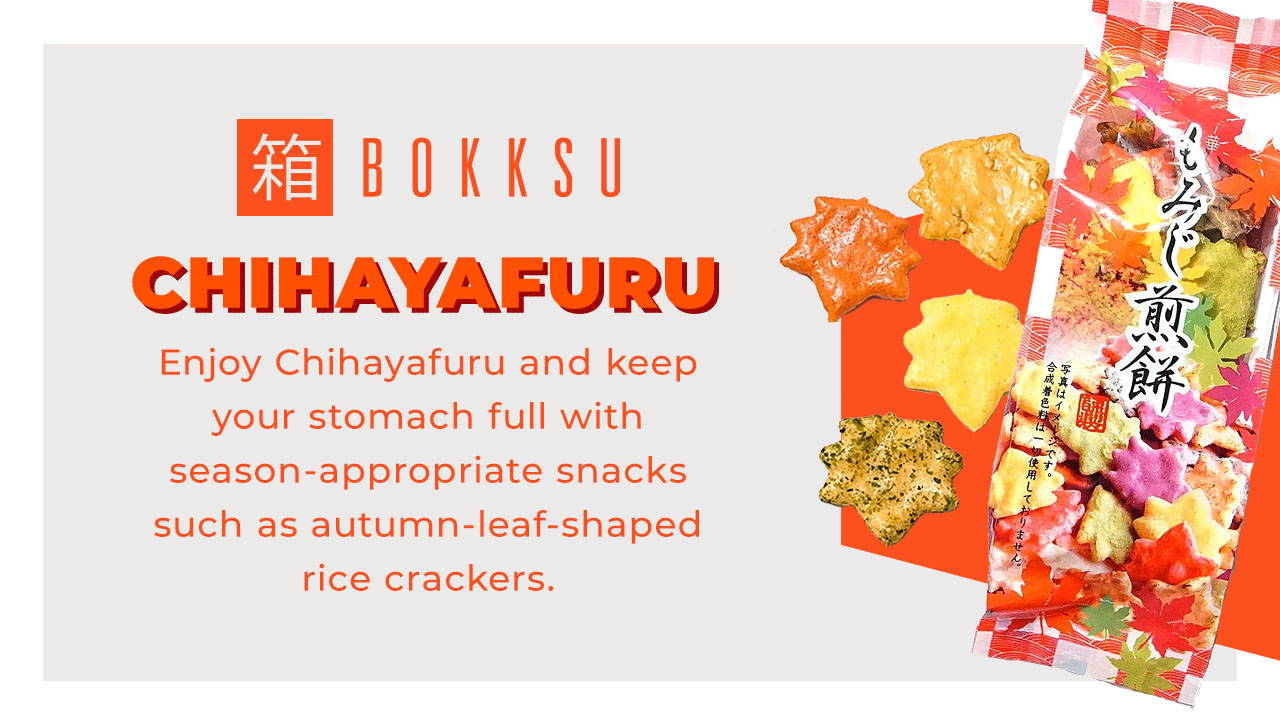 Chihayafuru and Fall Snacks to Keep You Full

It’s been six years since Chihayafuru season two ended in 2013, and the wait is finally over with season three returning this fall! Chihayafuru follows Chihaya Ayase and her love for competitive karuta, a traditional Japanese card game based on ancient poetry. Karuta cards feature snippets of classic poetry, which can usually be categorized into one of the four seasons. There are cards that touch on blossoming romance in spring or which allude to the sorrows of love lost with fallen autumn leaves. 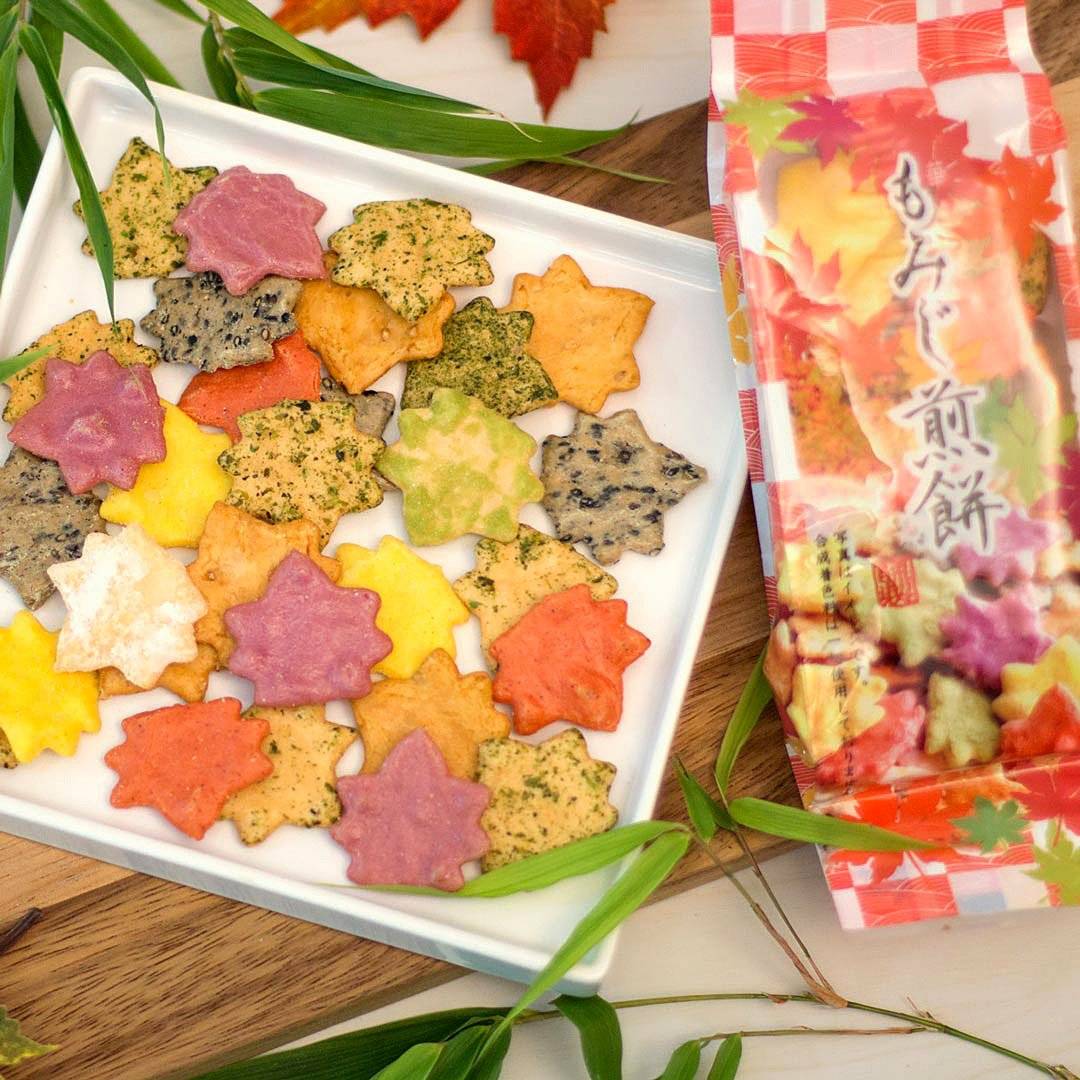 When spring arrives in Japan and the cherry blossoms bloom, people flock together to picnic under the trees for “flower viewing” parties (hanami, 花見), where they enjoy the views over plenty of good food. There are certain snacks associated with spring and commonly seen at these viewings, such as sakura-themed candies and green- and pink-colored dango rice balls. Enjoy Chihayafuru and keep your stomach full with season-appropriate snacks such as autumn-leaf-shaped rice crackers. Once the leaves start falling in Japan, chestnuts or kuri come into season and are seen in everything from cakes to mochi fillings. A popular food item in fall is the traditional confection, chestnut manjuu, a sweet rice bun filled with bean paste and chestnut chunks.

Food is a wonderful way to learn about a culture completely different than yours, and it is no surprise that it’s a huge reason a lot of people want to visit Japan. Do you have any Japanese snacks that you discovered through anime?

TRY THEM ALL
Back to Blog